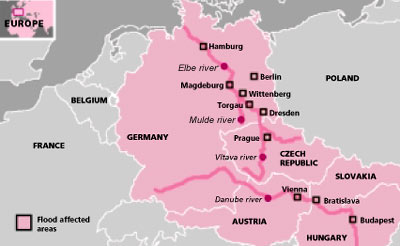 it is a downpour that has left most parts of central and eastern Europe submerged in misery. Over the past few weeks, unprecedented and severe storms have triggered floods in the region, claiming more than 112 lives, rendering thousands homeless and causing damage worth more than us $21.5 billion. Authorities say the floods have shattered all prior records. The deluge has had an impact on 24 countries. The nations worst affected by the floods are Germany, Czech Republic, Slovakia, Austria, Hungary, Romania and Russia (see map). Rain-swollen rivers continue to wreak havoc throughout the central part of the continent, with the Elbe overflowing in Germany and inundating the cultural treasures of Dresden. The Danube has also inflicted widespread damage in Slovakia, Austria and Hungary.

"The worst affected are upper and lower Austria and Salzburg. Parts of these regions have had rainfall never measured before since weather records began to be documented over 100 years ago," said Elisabeth Koch of the Austrian centre for meteorology and geophysics. In Dresden, the waters rose above the 1845 record high of 8.77 metres and have now reportedly reached nine metres. Germany's weather service has reported measuring 317 litres per square metre of rain at several monitoring stations -- the highest ever.

Experts have attributed the recent floods to a jet stream -- a fast-flowing 'river' of air moving from west to east at high altitude -- crossing into Europe instead of the north Atlantic. Often, the jet stream contains "jet streaks" of wind, which speed faster than the surrounding regions. These can play a very important role in precipitation and storm formation. Instead of moving eastwards across the north Atlantic and picking up relatively little water because of the low temperatures at those latitudes, the system crossed into Europe at a lower point. As a result, it carried far more moisture. When it delivered its payload on countries like Germany, Switzerland and Italy, this was a heavier downpour than normal.

Several environmental groups have raised concerns that the recent freak phenomenon in Europe could be a fallout from global warming. But the charge has been fiercely disputed. Geoff Jenkins of the uk's Meteorological office said that it would be wrong to blame climate change for the recent deluge. "We know that global warming is starting to take hold, which is going to bring some changes. But we have to be careful about ascribing all these changes to global warming, because the Earth is a very variable system already," he pointed out and added : "The weather at a point at any particular time is determined in our latitudes by the jet stream. It just happens that at the moment the jet stream is in a very unusual position." According to the London meteorological office, climate change models suggest extreme rainfall are most likely in winter and summers are predicted to be become drier in many parts of Europe.

Experts say that extreme weather conditions are known to have affected communities that live in the natural flood plains of rivers. This is a worrying aspect, because homes and industry have sprawled increasingly onto areas that have been prone to flooding. The problem is compounded by the fact that river systems also change course naturally and through development. Deforestation and construction around rivers, too, exacerbate the situation by reducing the ability of the ground to absorb water.