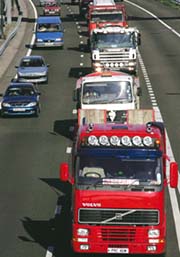 Life in Europe was recently paralysed due to widespread protests by truck drivers and farmers against a sudden rise in fuel prices -- a fallout of the halt to over half of the oil production in the Gulf of Mexico due to hurricane Katrina. While eu governments negotiated with oil companies to lower the prices, they were also adamant about not offering blanket reductions in fuel taxes; instead, they suggested localised measures to soften the impact. Crude oil prices peaked at a record level of over us $70 a barrel and subsequently dropped to us $63 a barrel.

Though a considerable part of the impact was absorbed by companies, Europe's central bankers were worried that economic growth would be adversely affected, as consumers would have less money for other goods.

In Belgium, truckers laid roadblocks across the country for many days. Talks between union leaders and the government continued with no agreement. Protesters were adamant to keep the barricades in place till the government yielded. The European Commission wrote to Belgian authorities pointing out that the blockades were affecting trade within the bloc. In uk, petrol stations remained closed for days. French truckers forced the French government to reduce fuel taxes after a weeklong protest. France also decided to hold a meeting of European transport ministers to discuss a solution. "People must understand that these problems are complicated and have to be solved together," said Prime Minister Lionel Jospin. The country also committed to take a tough stand against oil companies that failed to reduce prices soon.

In the Netherlands, truck drivers blocked many major routes after the country's finance minister Gerrit Zalm rejected fuel price cuts. Farmers also joined the protest. In Poland, truckers and fisherfolk warned authorities that they would block oil refineries and ports if the prices were not reduced. Spain and Ireland witnessed a similar situation. Meanwhile, oil majors bp and Shell lowered petrol and diesel prices in Austria but insisted that the move didn't stem from political pressure. They said it was the effect of fall in world oil prices.