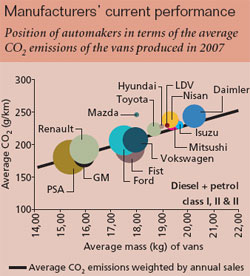 EUROPE has set fuel-efficiency targets for vans to curb greenhouse gases emissions. Environment ministers who met at Brussels in December endorsed a deal to achieve emission of 175 grammes of CO2 per kilometre by 2017 and 147 g/km by 2020 from vans. The 2017 target represents a 14 per cent reduction on the 2007 level of 203 g/km. The 2020 target is about 33 per cent lower compared to the 2007 level.

The proposal follows the regulation on CO

The Commission had proposed a tougher target for 2020—135 g/km— but that proved more contentious as automakers lobbied for diluted standards. Ministers agreed to soften that goal to 147 g. Manufacturers who exceed the limits will pay a fine of € 95 (US $123) per g/km According to reports, Berlin initially resisted the measures, forcing a slightly weakening of the strategy to make it easier for its big automakers Mercedes and Volkswagen.

T&E (Transport & Environment), a leading non-profit, said the automobile industry, backed by the governments of Germany, Italy and France, has succeeded in severely weakening an EU law setting CO2 standards for new vans.

T&E in a statement said that the industry claimed it couldn’t make a 14 per cent improvement in van efficiency over nine years, but improved car efficiency more than three times that rate last year. Policymakers must do a better job of holding the industry accountable when it makes such claims, the non-profit said.