The European blackcap has dramatically changed its migration pattern, flying to a new site, more than 1,000 km north of the region where it traditionally spent the winter. 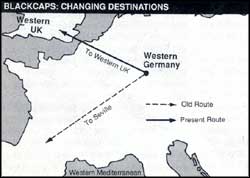 BIRD MIGRATION patterns can change dramatically over decades and scientists say global warming can increase the incidence of such changes.

Drastic changes in climate and landscape during the ice ages led to many birds altering their migratory routes. Such changes occur at present as well, but too gradually to be noticeable. Scientists now report the blackcap (Sylvia atricapilla) has made a major change in its migration route in just 30 years (Nature, Vol 360 No 6405).

Heidelberg biologist P Berthold and his colleagues say at least 7 per cent of blackcaps in Germany and Austria have shifted their winter destination from the western Mediterranean to the western parts of Great Britain. They suggest the mild winters that UK has been experiencing over the last 30 years could be the reason why blackcaps have chosen it as their winter home. The new route is also much shorter. A further inducement for the blackcaps could be that the practice of feeding birds is increasing in UK and the blackcaps are taking advantage of it.

In seeking to determine whether the route change had a genetic basis, the Heidelberg biologists bred some blackcaps that had chosen the new route and found their offspring also showed a tendency to migrate in the same direction as the parents. "This is the first case in any vertebrate in which a drastic and recent evolutionary change of behaviour has been documented and its genetic basis established," the biologists report.

Human-induced environmental changes such as global warming, they add, should benefit European bird species whose numbers are severely reduced by harsh winters.