Many residents shifted to areas with high radiation; system for issuing safety warnings on radiation failed 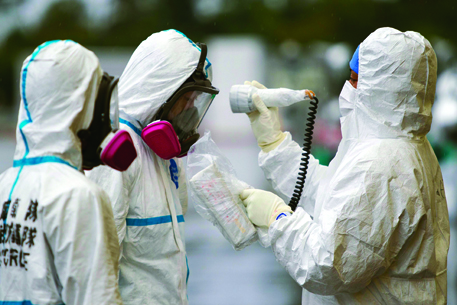 A survey commissioned by the Japanese parliament, Diet, has found that the government failed to inform people living in Fukushima and adjoining areas about radiation levels following the Fukushima nuclear accident in March last year, leading to chaos and confusion during evacuation. The survey found that many evacuees moved to areas which were subsequently included in the evacuation zones; most of these people had to move at least four times after their initial evacuation. Some people were relocated up to six times or more. Incidentally, the call for voluntary evacuation was not issued until March 25, 2011, a fortnight after the nuclear power plant was simultaneously hit by an earthquake and a tsunami, leading to a series of nuclear meltdowns. The survey, based on responses taken from the people in evacuation zones, was released on June 12.

The report also brought to light the failure of the System for Prediction of Environmental Emergency Dose Information (SPEEDI), which was set up during the 1990s when Japan started commercially exploiting nuclear power. The system was meant to help in issuing safety warnings in the event of radiation leakage from nuclear power plants. The absence of SPEEDI's real time radiation data led to confusion and only 30 per cent of the affected families shifted to safer areas voluntarily. Worse, about 50 per cent residents of Namiemachi area were relocated to areas with high radiation dose.

The survey was commissioned in December 2011 by Diet’s Nuclear Accident Independent Investigation Committee (NAIIC) to randomly interview a group of 21,000 of the 55,000 households in the evacuation zones. A little over 50 per cent households (10,633) responded to the survey and about three-quarters of them (8,073) criticised the government and the power corporation managing the nuclear power plant—Tokyo Electric Power Company (TEPCO)—for not reacting to the emergency urgently.

The survey indicates that only 70 per cent of the residents could be evacuated in four phases from near the Fukushima Dai-ichi and Fukushima Dai-ni plants. It shows that less than 15 percent people living within the affected nuclear power project site's premises had received evacuation training, and less than 10 per cent had received information on the possibility of a nuclear accident. The survey report has included comments of residents and nuclear plant workers. “I used to work at a nuclear power plant and never thought of such an accident. When I was working as a contract worker of TEPCO on the first floor, I asked a team leader ‘what if a tsunami similar to the one in Sumatra hits Japan?’ The reply was ‘impossible!  There is no need to think of an impossible situation.’ After all, TEPCO, government, and municipality did not think seriously enough. Neither did I,” a former worker from Okumamachi stated in the survey.

Many residents did not even know that they were being evacuated because of a nuclear accident. “Residents were given evacuation order, but they did not receive information about the situation or the accident that would be useful for their evacuation. As a result, many residents could leave with only barest necessities,” states the survey. Only a handful learnt about the situation from the plant operators, TEPCO, while most of them were informed about the incident from the local authorities. “If there had been even a word about a nuclear power plant when evacuation was ordered, we could have reacted reasonably, taken our valuables with us or locked up the house before we had left. We had to run with nothing but the clothes we were wearing. It is such a disappointment every time we are briefly allowed to return home only to find out that we are robbed again,” a resident of Okumamachi commented in the survey.

With the survey's findings out in public domain, it would be difficult for the Japanese government to ignore demands that the surveyors received—1,120 individual messages in the survey forms said that causes of the accident should be probed as soon as possible, and that the outcome of the study to be disclosed fully. The surveyors also got 1,035 messages demanding decontamination work be carried out quickly so that the evacuees can return home.
Web Specials Web Specials Web Specials Tokyo Electric Power … System for … Nuclear radiation Nuclear Accident … Fukushima nuclear … Evacuation operations Diet report
SUPPORT US