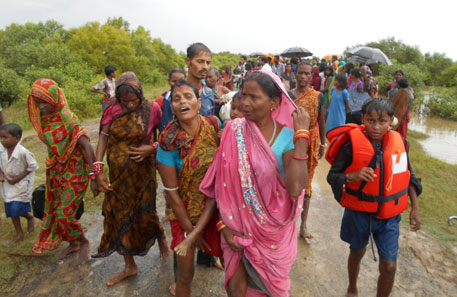 The mass-evacuation of people from coastal areas of Odisha ahead of cyclone Hudhud led to a mishap on Saturday morning. A boat carrying about 35 people, including women and children from the seaside village Satabhaya, capsized in the crocodile-infested Bausagali river within Bhitarkanika National Park of Kendrapada district of Odisha. A girl died in the mishap and a boy is yet to be traced and feared dead; 10 people sustained injuries.

“The body of Puja Mallick (9), daughter of Mahendra Mallick,  was found; a boy Hemanta Mallick (11) son of Kumbha Mallick is still missing,” said Pramod Kumar Das, district collector of Kendrapada. The tahasildar and the block development officer (BDO) of Rajnagar were also crossing the river in this boat at the time of mishap.

The people were shifting from the low-lying area of Satabhaya to the cyclone shelter at Okilapala around eight km away. The boat capsised after it hit the roots of mangrove trees, said the district collector.

“The country boat has capacity to carry around 15 persons but 35 persons were on the boat,” informed Nabaghan Nayak a local.
Tension mounted in Satabhaya village and its nearby areas after the mishap. Many locals blamed the district administration for the mishap and refused to leave the village.

“On Friday, the BDO and other officials visited Satabhaya and told us to leave the village before Hudhud arrives. We urged them to arrange mechanised boats to cross the river Bausagadi and they agreed.  But the authorities provided only a country boat, said Basanta Nayak of Satabhaya.