Eve born, doubts yet to die down 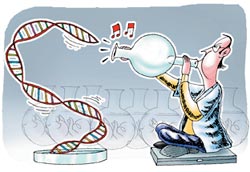 If Bahamas-based cloning company Clonaid is to be believed, the world's first cloned baby, Eve, was born on December 26, 2002. The birth, at an undisclosed location, went "very well", according to Brigitte Boisselier, head of Clonaid. Boisselier is connected to the Raelian Movement, a group that believes that life on Earth was created by extraterrestrials through cloning. She has refused to divulge details about where the baby was born.

Furthermore, Boisselier was unable to present deoxyribonucleic acid (dna) evidence showing a genetic match between the mother and the daughter. This omission leaves her claim scientifically unsupported. Although dna tests had been planned, they were postponed after Florida lawyer Bernard Siegel asked a state court to appoint a legal guardian for Eve for protection, claiming that the child may have birth defects and was being exploited.

Boisselier has said that dna tests on Eve have been postponed because the baby's parents want to keep their identity secret. The Florida law allows anybody to file a petition for court protection of a child if there is enough information that the child may be in danger. Siegel filed his petition in Florida as that is where Clonaid announced Eve's birth, although the child may not necessarily be in that state.

Clonaid claims that Eve is a clone of a 31-year-old American woman who had donated her dna. Proving that the baby is a clone of her mother would be possible by showing that their dna is identical.

But scientists are sceptical. Alan Trounson of Monash University in Melbourne, Australia, says he does not believe the group has the expertise to clone a person. "And nearly everything they have said in the past has never been confirmed by scientific investigation," he told the Sydney Morning Herald.

So far scientists have succeeded in cloning sheep, mice, cows, pigs, goats and cats. Last year, scientists in Massachusetts produced cloned human embryos with the intention of using them as a source of stem cells, but they never grew bigger than six cells. Many scientists oppose cloning to produce humans, contending that it's too risky because of abnormalities seen in cloned animals (See: Trouble with doubles). Compounding the confusion, Clonaid has announced that a second cloned girl was born in Europe to a lesbian couple.