Even Japan not equipped to protect biosafety, says anti-GM group

While the ongoing sixth Meeting of the Parties to the Cartagena Protocol on Biosafety (CoP-MoP 6) in Hyderabad is deliberating ways of safe handling and transportation of genetically modified organisms (GMO), incidents of mishandling of GMOs by the industry and its consequences have come to light.

Even economically developed countries like Japan are ill-equipped to handle GMOs, say Toshiki Mashimo and Michiye Koketu of the Consumers' Union of Japan, a group battling GM crops. They made a presentation on contamination of local crops by genetically modified canola (rapeseed) at the ongoing biodiversity conference in Hyderabad, and said that even Japan has no easy answers for GM-related issues.

GM canola, imported by big oil companies, is now spreading and is posing serious health and livelihood problems, the consumers' union presentation says. The spilling of rapeseed from trucks occurs mainly around the harbours and by the roadsides. Japan has many small and medium companies that make food oil from domestically grown canola seeds. Their contamination because of the spread of GM has adversely affected the companies; many of them have been forced to close shutters. “We also eat the traditional, domestically grown variety. Small industries, farmers and consumers who want to eat healthy food are the victims of GM canola, “ says Mashimo. 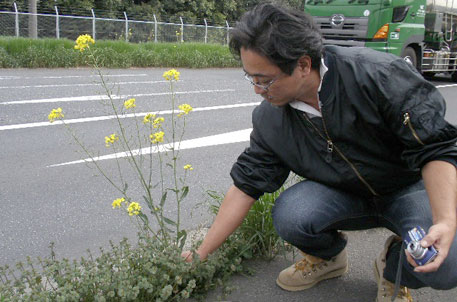 Ironically, the supplementary protocol on biosaftey which deals with liability and redress for damage was adopted in 2010 in Nagoya, Japan. “But we don’t have strict laws for liability and redress to deal with contamination that arises from trade of genetically-modified crops,” they point out. The Japanese government is unsympathetic towards the issues raised by farmers and small industries and citizens. “ Had there been a liability law, we could asked for compensation from the big companies,” says Koketu.

Multi-national companies like Monsanto and Bayer are strongly insisting on their patent rights to GM crops but they are silent when it comes to liability for damage, point out Mashimo and Koketu. The companies must take full responsibility for the problems with GM crops, including imported canola, they demand.

The Consumers' Union, which held a campaign collecting two and a half million signatures, is now lobbying for amending the Japanese laws and make them consistent with international biosafety protocols. It calls for a complete review of domestic laws in Japan regarding biosafety to include agriculture and human health through legislative action by Japan’s parliament. Civil society and non-governmental organisations are calling for a strict liability regime and binding rules regarding redress, including funding for clean ups.