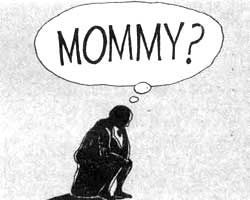 EVE MAY not have been the mother of the human race after all. Molecular biologists have been arguing that the genetic components of human beings indicate that all family trees lead back to a single African woman, nicknamed Eve, who lived about 200,000 years ago.

But there is a school of thought among geneticists and anthropologists who dispute that the modern, big-brained Homo sapiens arose in Africa and replaced rather than mingled with archaic humans there and in other regions. They believe that the evolution of modern humans occurred roughly simultaneously in many places.

Says Alan Templeton, a geneticist at Washington University in St Louis, "The inference that the tree of humankind is rooted in Africa is not supported by the data."

The "Africa school" got a shot in the arm when Linda Vigilant, who was part of the research team at the University of California at Berkeley that had come out with the Eve theory in 1987, reported that the greater genetic diversity of Africans compared to the Caucasians or Asians indicated that they are the product of a longer evolutionary lineage. Africans, evidently, had more time to create more mutations.

But Templeton is not convinced and points out many flaws in the findings of Vigilant and her team. Scientists, feels Templeton, may never be able to resolve the issue of how the human race began.