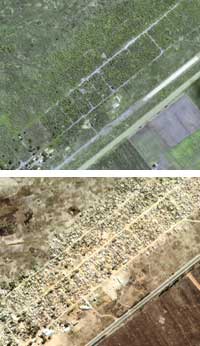 Amnesty International has released satellite images as evidence of the devastation caused by Zimbabwe's programme of demolishing houses, carried out last year. They used satellite images of Porta Farm, a settlement of about 10,000 people just outside its capital Harare, before and after Operation Murambatsvina -- a countrywide programme of forced evictions and demolition of homes and informal businesses. Images taken in June 2002 show a vibrant community with hundreds of homes, while those shot in April 2006 show all the structures razed. The programme was carried out despite two orders by the high court stating that the people should not be evicted until the authorities ensured alternative accommodation for them. After the eviction, the Porta community was relocated to Hopley Farm, where they were left with no shelter and almost no means of accessing food.