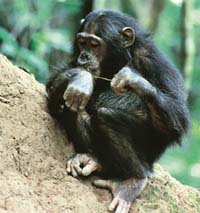 the complex nature of the human brain has acted against its own evolution. Scientists say that as the human brain grew in size and complexity, the evolution of its gene sequences has slowed down, compared to that of the lower animals.

The complex interactions that take place between multiple genes in the brain prevent rapid evolution of the genes, says a paper published online on December 26 in the journal PLOS biology.

"We found that the genes expressed in the human brain have slowed down in their evolution, contrary to some earlier reports," says Chung-I Wu, professor of ecology and evolution at the University of Chicago.

According to the scientists, the pace of evolutionary change among thousands of genes in the brain tissue has slowed since the split between the chimpanzee and the Homo sapiens, millions of years ago.Gene sequences between the two remain very similar, but earlier studies in tissues other than the brain have shown that gene expression varies widely. Some other studies also say that within the brain, the number of genes expressed per neuron is greater in humans.

"On the basis of individual neurons of the brain, humans may indeed have a far more active, or even more complex, transcription profile than chimpanzees," the authors note.

"We suggest that such abundant and complex transcription increased gene-gene interactions and constrains evolution."

The scientists then sequenced several genes expressed in the brain of the macaque monkey and compare them with available genomic sequences from humans, chimpanzees, and mice. They found that the advanced species had faster overall rates of evolution.