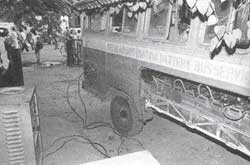 IN a bid to reduce vehicular pollution, the Motor Vehicles (Amendment) Act, 1994, has stressed upon incentives for the utilisation of vehicles run on non-conventional energy. The amendments, which have received Presidential and Parliamentary assent and are to be notified shortly, gives the Union government more powers with regard to laying down stricter norms for vehicles and liberalising the system of granting permits.

According to the Act, transport operators who use non-polluting energy such as batteries, solar power or compressed natural gas, will not have to obtain permits from their respective state transport authorities or from the ministry. This has been done to encourage a greater use of such vehicles for public-transport purposes, especially in congested, urban areas and in the vicinity of monuments threatened by pollution, such as the Taj Mahal.

A plan for commuter services in the choked Chandni Chowk locality of Delhi includes the battery coach service, and as diesel and petrol driven vehicles are banned within a 2 km radius of the Taj Mahal, battery-operated vehicles have become viable alternatives. Ministry of surface transport (mst) joint secretary C S Khairwal says, "We are giving transporters who use such fuels the option of choosing the route of operation." The Act, however, bans the utilisation of liquified petroleum gas, which, though a cost-effective fuel, has raised fears because of its high flammability.
It also allows transporters a free hand in determining freight and fares for a specific period, if they use such fuel. This, says Khairwal, will ensure that more "clean" vehicles may be adopted at least for intra-city goods transport, because of the economic viability for carriers.

The Act vests upon the Centre the powers to order the compulsory fitment of catalytic convertors in vehicles. This is in addition to the powers already available pertaining to the fixing of emission norms. However, no date has been fixed as yet for catalytic convertors for cars in metropolitan cities, although the ministry of environment and forests has been pressing for an April 1, 1995, deadline.

The new provisions also give enforcement agencies more teeth, with offences relating to emission norms having been made compoundable. "Earlier, after the vehicle that had violated the norm was booked, the matter was settled in court. Now the inspector can impose a fine of upto Rs 1,000 on the spot upon the violator," says Khairwal.
Besides, trying to check vehicular pollution, the Act also tries to reduce accidents. Helmets have been made mandatory for both the drivers of 2-wheelers and the pillion riders. mst plans to launch a massive campaign to curb fatalities on the roads and a National Road Safety Policy is expected to be announced soon. The mst hopes to bring down the present rate of fatalities from 60,000 per year to the targeted 25,000 by AD 2001.

The initial response to the new provisions has been positive. A spokesperson for the All India Motor Transport Congress says, "We will definitely consider the new rules seriously, because of the incentives." A K Gayen, director in the ministry of non-conventional energy sources, says that the new Act is in line with the recommendations his ministry had put forward. "We were always of the view that the use of alternate fuels for motor transport should be encouraged."

The Act is expected to give a boost to the battery-operated mini-buses, which are mainly manufactured by Bharat Heavy Electricals Ltd's (bhel) Bhopal division, and the Bombay-based Chatelec Ltd. Says A S Paik, senior manager (commercial), bhel, "The trend towards the utilisation of these vehicles is increasing." bhel has already put about 200 such vehicles on the roads, their major buyer being the Delhi Energy Development Agency. The manufacturers are optimistic that their sales graph will climb. bhel recently received an order for supplying 10 such vehicles, each of which cost approximately Rs 7.90 lakh, from the Uttar Pradesh government.