Experts give them a miss 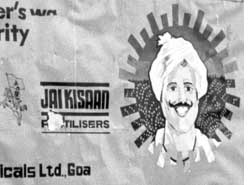 farmers do not disappear when they are not making news by protesting support prices or committing suicides (see Sweet victory) . They work the fields and go about living their life like other people. But most descriptions in India of farmersbe they in government documents or ngo annual reports or newspapersportray them less like people and more like somebodys idea of a tiller.

For the old school nationalist, the farmer is the selfless, soldier-like nation-builder straight out of a Republic Day tableau. For the Leftist, the farmer is an intermediary stage in the path of industrialization and revolution. For the neo-liberal economist, the farmer drags down economic growth parameters that can attract foreign investments. For the city-bred journalist, the farmer is a wrinkle-faced old man wearing a dhoti and a turban, sitting on cracking earth in a drought year to provide a photo-op. For the politician, a farmer is a vote.

Yet about half of Indias population, if not more, continues with agriculture in some form or another. Their survival and prosperity depend on markets for agri inputs and farm produce. The government controls agricultural markets because they affect food prices as well as farmer income. This regulation is a very complex exercise, and involves economic data from informal sectors, which do not maintain records very well.

The protest over sugarcane support price is indicative of a deeper rot that has not been addressed for years several sugar mills are sick, especially those owned by the government or cooperatives. Among the reasons for their distress is political interference in financial decisions and lack of modernization. Some private sugar mills, for example, tide over market fluctuations by adopting cogenerationthey produce power from the same industrial process (see our issue of June 15, 2009).

There is need for change at the farm end, too. While all farmers want to profit from sugarcane cultivation, it is not a very versatile crop and needs a lot of water. But the agriculture research machinery has failed to suggest alternatives that are as remunerative.

A lesson from Maharashtra

people of Bhimshankar area in Maharashtras Pune district are not weather expertsat least they wont be recognized as such by the firmament. But they have their ways of reading weather to plan agricultural activitiesa timetable that worked with clockwork precision till three decades ago. Then massive destruction of forests by coal contractors brought a change in the rainfall pattern. This is no conclusion of a weather observatory. Bhimshankars residents kept meticulous records of the destruction pattern and made careful co-relation with the weather (see Stars don't foretell any more) . Disaster diplomacy does not have much place for such insights. But for discussions at negotiating boardrooms to have any effect at grassroots level, its pertinent that such initiatives are recognized.

by the time this edition of Down To Earth gets into the readers hands, the global focus will be off Copenhagen. Governments and experts assembled at the Danish capital would have sealed a post-Kyoto arrangement to arrest climate changevery likely announced their failure to arrive at one. Climate change is often seen as a global problem demanding global solutions. The enormity of the problem means governments and experts are seen as agencies to solve it. But history shows people are never passive to matters we think are in the exclusive realms of governments and experts. It is just that their stakes are different from that of the delegates at UN meets.

Take Africa, for example. Competition for water, between farmers and herders and between countries, has long sparked conflict in many of the regions arid areas and even the UN recognizes it as of the main causes of the war in Sudans Darfur region. But the trouble is only beginning, as it becomes clear that climate change will have its sharpest effects in Africa, leading to rising hardship, massive population displacement, and, in some cases, all-out war (see War-like climate) . In general, crises like these are viewed through the optic of military geopolitics. But such conflagrations are also related to emissions from factories, power plants and automobiles. Will the experts assembled at Copenhagen make such a connection?

We will keep you informed.