Among steps recommended to save the marine environment of the Bay of Bengal region is involving local people in coastal development planning. 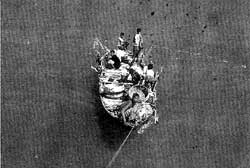 MARINE scientists working in the Bay of Bengal region advocate a holistic approach, including multidisciplinary research and placing marine environment high on national agendas, to ensure the region does not deteriorate.

Scientists from India, Indonesia, Malaysia, Maldives, Thailand, Sri Lanka and Bangladesh discussed at length the threat to fisheries in the region during a meeting on environmental hazards organised recently in Colombo by the UN Food and Agriculture Organisation's Bay of Bengal Programme (BOBP).

With pragmatic thinking replacing individual calls for more research, the meeting emphasised the need to put research priorities in perspective in seeking solutions to problems. Biological indicators to measure pollution levels, involvement of local people in coastal development and use of waste in fish farming were some of the goals suggested.

One of the suggestions contained in a BOBP study was for organic treatment of waste water, as practised by fishermen of the Mudiali cooperative in West Bengal. After passing the water through an ingenious system of ditches with dense vegetation of water hyacinth of the Eichhornia and Valesneria varieties, the fishermen use it to produce upto 7 tonnes of fish without the need of any feed or fertiliser.

The scientists pinpointed siltation, dumping of untreated waste in the rivers and destructive coastal development as major causes of the degradation of fisheries in the region.

In some instances, the government concerned has had to act reluctantly, as in Malaysia where the organic load dumped into the sea is 200 times more than the norm. This is because though the government imposes a fine, industries are not penalised further and can dump upto 50 times more than the norm. An FAO scientist, noting that mangroves, coral reefs and sea grass are also being destroyed in the BOBP region, pointed out, "Ninety per cent of the fish caught in tropical areas depend on the mangroves and coral reef environment." Coral reefs also generate upto 30 tonnes of sand per square kilometre and thus help to maintain shore lines.

The destruction of the marine environment often is unintentional and results from bad planning, poor knowledge and lack of coordination between agencies and authorities, said S Holmgren, BOBP environment advisor, who is based in Madras. But, some of the scientists complained unhesitatingly that the major environmental problems being faced now are caused primarily by the entry of big business, with the political clout they wield, into fisheries. "To break this political clout, environmentalists who can expose these linkages need to be involved," said a South Asian scientist.

Shrimp farming, done mainly by large industrial houses, is a major factor in the destruction of mangroves in Indonesia, Bangladesh and West Bengal (Down To Earth, February 28, 1993), which, in turn, is leading to the elimination of other fish species.

The meeting noted scientists could play a major role by generating data through conducting increasing research on multidisciplinary areas such as assessment of pollution levels and its treatment, cost-benefit analysis of pollution management, impact and dispersal of oil spills, inventory of resources and identifying environmentally benign and socially appropriate solutions.