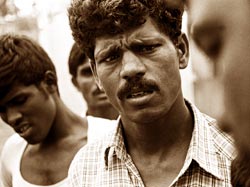 the Andhra Pradesh government has decided to send hundreds of poverty-stricken farmers to east African countries to find employment in cooperative farming. It is making efforts to lease land in Kenya, Tanzania and Uganda and establish cooperatives. Part of the profit from the output of the farms would be used to pay back the cost of the lease. Kenya and Uganda are believed to be eager to gain from the farmers' experience to help their trouble-ridden farm sector.

More than 500 farmers of the state have committed suicide since the Y S R Reddy-government came to power in the state in May 2004. Several suicides had taken place earlier too (see 'Inevitable Tragedy', Down To Earth, July 15, 2004).

"This is a business opportunity for Andhra farmers who are well-versed in tropical and arid area farming. They can send their earnings back home without any hindrance," said N Raghuveera Reddy, the state's agriculture minister. The government would pay for their travel as well as interpreters, he added. On October 28, 2004, Reuters quoted Indian officials as saying that the government is negotiating with Kenya to lease about 20,000 hectares of land in the country. Tobacco, cotton, groundnut, millet, chickpea, fruits, and flowers would be grown there. The farmers would be accompanied by state officials, who would help them establish cooperatives and coordinate with the Kenyan government.

Kenya's high commissioner to India Mutuma Kathurima recently held talks on the issue with the chief minister. "We have fertile land and abundant water, but what we need is the Green Revolution experience of Indian farmers," he reportedly said. C C Reddy, an advisor to the Andhra Pradesh government, says the two sides might sign a memorandum of understanding on the arrangement soon. But Kenya's lands minister and agriculture minister have said they are not aware of the matter. Talks are also being held with officials of Tanzania and Uganda.