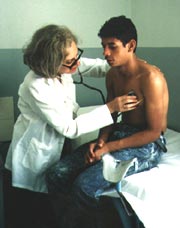 Brazil is going global with its highly potent anti-aids programme. It will share its know-how in combating the disease with other countries. That the nation has succeeded in cutting its aids-related deaths by half over the past eight years is a measure of the campaign's success.

Recently, leaders from Portuguese-speaking countries signed a pact with Brazil in this regard. It has also received formal requests for help from 20 African and Caribbean countries. The director of Brazil's sexually transmitted diseases (std) / aids programme, Paulo Teixeira, has said that Brazil would pledge us $1 million -- 10 proposed pilot projects worth us $100,000 each -- to stimulate governments to follow Brazil's lead in adopting a proactive approach against aids. In Brazil, those infected with hiv get free access to a cocktail of anti-retroviral drugs. The government is allowed to produce generic copies of imported drugs in a national emergency. In 1997, state labs began producing seven such drugs. Brazil also told international companies to lower prices if they wanted to retain the market. Existential compulsions have made the pharmaceutical giants fall in line. It now costs Brazil an average of us $2,100 to treat each patient annually. Today, not only has the mortality rate fallen by 50 per cent, the average survival period for an aids patient has risen from six months to five years.