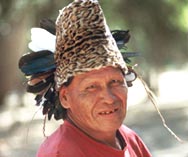 It is not flora and fauna alone that are under threat of extinction. Tribal people, too, seem to be living on the edge. The populations of the Ayoreo-Totobiegosode of western Paraguay, the Jarawa of Andaman Islands in the Indian Ocean and the Gana and Gwi and Bakgalagadi in Botswana are dwindling. This revelation was made on the eve of the UN Day for Indigenous People (August 9) by Survival International, a UK-based organisation espousing the cause of tribals the world over.

Noting that these groups "live in totally contrasting environments across three continents", Survival's director, Stephen Corry, observed that their disabling experiences "are startlingly similar". He added: "Unless these tribes are allowed to live on their own land in peace, they will not survive." Dispossession of their customary rights over land has put the tribals' survival at risk. Deprivation of various kinds and degrees has compelled them to give up their traditional lifestyle and resulted in rapidly diminishing indigenous populations.