Extinction is all encompassing 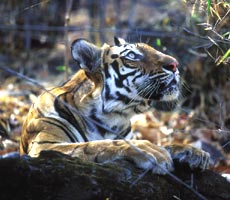 extinction not only affects the species that disappears, but alters its entire community, changing how the community as a whole, as well as individual species, respond to ecodegradation.

This is the conclusion of researchers from the us-based University of Wisconsin-Madison. Interested in understanding what happens when species go extinct, they developed mathematical models looking at changes in a community's tolerance to a particular environmental condition, such as global warming. As per their findings, as individual species disappear, two forces begin to act upon a community. One of these forces occurs when species disappear in order of their sensitivity to a particular environmental factor, with the least tolerant ones going extinct first and the best-suited ones left behind. Study author Anthony Ives avers that this ordered extinction leaves a community more resistant to that environmental pressure, protecting it from future degradation.

While this may sound like good news, there is a downside. The community's resistance to an environmental condition changes over time due to another force: alterations in foodweb interactions resulting from the extinction of 'individuals'. According to the researchers' models, the continuous extinction of organisms ultimately dampens the ability of surviving species to compensate, or increase the population size of the community. On the whole, this depletes a community's ability to withstand environmental degradation. "Changes in the foodweb and their indirect effects on organisms within a community even changes the order of extinction, considerably altering the fate of many species," explains Ives.

Due to such dynamics, it becomes challenging to determine which species may vanish next. Therefore, the researchers suggest a holistic approach to conservation. "Because we have no idea what species may fall next in the order of extinction, it we would be most prudent to conserve as many as we can right away," concludes Bradley Cardinale, the other study author.