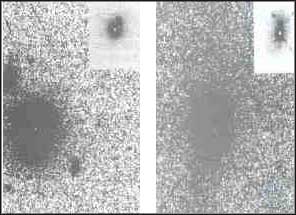 QUASARS are among the most intriguing objects in the sky. Discovered in the early 1960s, these quasi-stellar bodies, as they were termed then, are the most luminous objects in the universe which appear like stars optically, but are at distances similar to the most distant galaxies. At these distances, they necessarily produce immense quantities of energy.

Though many theories have been proposed for the power source of the quasars, the most convincing one calls for the presence of a super massive black hole (with a mass of a million to 10 billion times that of our sun) sucking matter from its surrounding host galaxy. These active galactic nuclei - as quasars and other similar entities are known - are supposed to be fuelled by the matter failing into the black hole (Nature, Vol 376).

The lacuna in this hypothesis has been that there has been no direct observational confirmation that a quasar resides in the center of the host galaxy. The host galaxy, if it is normal, will usually be much fainter than the quasar which is truly a cosmic power- house. The light from the quasar is distorted in the earth's atmosphere, completely swamping the weaker signal from the host galaxy. Thus ground-based telescopes have not been able to observe the surrounding galaxies of quasars.

Now for the first time we may have direct observationaVevidence of the presence of host galaxies of 4 quasars. M J Disney and co'-researchers have reported their observations of 4 quasars through the Hubble Space Telescope (HST); the HST is ideal for such observations because it does not suffer from atmospheric turbulence which plagues ground-based telescopes.

Using the planetary camera within the wide field/planetary camera 2 on the HST, the researchers could get enough sensitivity and resolution to be able to observe luminous elliptical galaxies - which were featureless - alongside their close companions. The HST images have unprecedented resolution and are thus ideal for such studies. With more observing time, different filters and future developments in instrumentation, we may be able to finally resolve one of the outstanding puzzles in astrophysics.