Genetic engineering enables the discovery of a gene responsible for the development of the eye, suggesting new possibilities of treating defects of vision 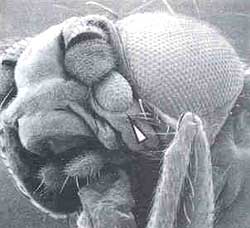 VISION is one, of the most stunning achievements of evolution. Beginning in our ancestors with a semi-transparent membrane that had let in light, the visual system in higher animals has evolved to an amazing level of sophistication. The first element in the system, the eye, is as close to a perfect organ as anything that has appeared in the course of the history of life on earth.

We know of at least three kinds of sophisticated eyes today: the 4nsect eye, the molluskan eye and the vertebrate eye. Of these three, the ii*ect eye is radically different as far as Organisation is concerned. Also, it is a compound eye, made up of many hundred smaller eyes, each of which points in a different direction. In spite of its presence in an evolutionary more primitive form than the eyes of other organisms, the insect eye is as complex a structure as, for instance, our own.

Logically, the design and construction of such an organ would seem to require the coordination of a large number of elementary steps. And this makes the recent discovery of a single 'master'gene for eye develp mentinthe fruitfly Drosophila melanokaster difficult to understand. The work was carried out by Georg Haider, Patrick Callaerts and Walter Gehring of the Biocentre in Basel, Switzerland (Science, Vol 267, No 5205,1995).

These scientists made use of a previously known gene called'eyeless'. When mutated, eyeless was known to cause abnormal development in the compound eye of D melanogaster. There are at least four other genes that are known to cause comparable defects when mutated, but none of them appear to affect the activity of eyeless. This observation suggested to Haider and his colleaves that eyeless might be at the head of a hierarchy of genes involved in development of the eye.

In order to test this hypothesis, Haider and his team used the methods of genetic engineering to alter the normal pattern of expression of the eyeless gene. By this means, they ensured that the eyeless gene was active in body tissues such as the antenna, the leg and the wings - where it is normally unexpressed. To their surprise, just this one gene, when made functional in an abnormal - 'ectopic' - location on the body, led to the development of what appeared to be normal compound eyes, but this time at the end of the antenna, or as part of the leg or wing!

The fascinating question @ which remains unanswered as of now - is whether such eyes can also help in seeing. What makes the finding especially intriguing is that at the level Of DNA, eyeless Iresembles a, gene in humans called aniridia. Aniridia is known to be necessary for the proper development of the eye. This resemblance opens up the long-range possibility of radical treatments for human visual problems.