Eyes of the beholder

Yes, we can see. A new study tells us how 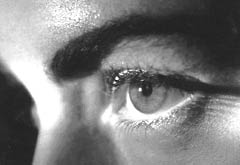 each visual scene that we look at is highly detailed and composed of numerous elements. Though we can usually appreciate a scene as a whole, our eyes continue to move from one element of the scene, or a "target," to another. These movements are called saccades or saccadic movements and represent the brain's attempts to "record" what we are looking at, or what holds our visual attention.

Now, as scenes get more intricate, the number of potential targets for the eyes increases, and with it, the uncertainty that any particular target will be selected for an eye movement increases as well.

How our motor systems controlling eye movement overcome this target uncertainty remains unknown. However, a recent study by M A Basso and R H Wurtz of the National Eye Institute in Bethesda, usa , shows that the activities of neurones present in the cerebral cortex and the superior colliculus (regions of the brain) are modulated by this target selection process (Nature Vol 389, No 6646).

The experimental technique involved standard electrophysiological methods. Electrical recordings were made from neurones of the superior colliculus in two monkeys while they were shown spots of light as stimuli. These neurones play a vital role in eye movements.

The experiment required the monkeys to look at a particular spot of light at the centre of the screen. Subsequently, an array of possible "targets," with one, two, four or eight spots of light came on. These were distributed in a circle around the central spot. One of these secondary spots was then dimmed slightly to indicate that it had been chosen as the real target. The central spot was then removed and the monkeys' eyes were required to initiate a saccadic movement in order to re-focus, this time on the new target. If the monkeys did so, and maintained their gaze on the target for at least three-tenths of a second, they were rewarded.

Later, two uncertainties were introduced. First, the number of targets presented on different trials was varied. Then, the same visual array was presented, but on each trial, the target was changed.

In both experiments, neurone activity decreased as uncertainty increased. With a single target, the neurones showed a temporary response that continued as the target dimmed, then there was a burst of activity preceding the saccadic movement towards the target. During the intermediate period of uncertainty, if the number of potential targets was 2, 4 or 8, the initial response was markedly decreased. The increased number of targets also caused a decrease in activity in the later phase. What was interesting was that in the final phase there was a marked increase in neurone activity only when the number of potential targets was large and finally one of them was actually selected.

When the eight-stimulus array was presented in two different conditions (either different target on each trial or same target on each trial), the results were similar. When the same target was presented repeatedly as the goal, the uncertainty was minimised and the neurone was very active. On the other hand when the uncertainty was high (mixed targets), the neurone activity was markedly low.

These experiments confirm that saccade-related activities of neurones in the superior colliculus depends on the degree of uncertainty of the target. The changes in neurone activity can be modulated by target uncertainty both when the previous experience is different and when the target itself varies. This shows a way in which the brain organises its responses to an uncertain world.