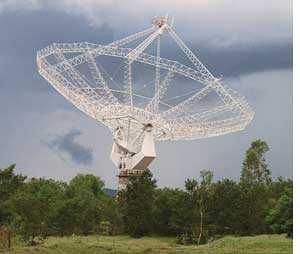 astronomers in India see a large window opening into the sky. In about a decade they would be gazing into farther corners of the universe that current telescopes cannot reach. To get that edge premier Indian research centres are analyzing three collaborative optical telescopes being built around the world, each larger than any existing telescope, each with a huge potential to answer a question that may never lose its appeal. "Astronomy is driven by the question of our origins," said Dipankar Bhattacharya, key researcher and professor at Pune's Inter-University Centre for Astronomy and Astrophysics (iucaa).

India will select the best of the three telescopes and buy research time on it.And this it wants to do by the end of this year, which is also the International Year of Astronomy, marking the 400th anniversary of Galileo's first use of an astronomical telescope.

The choices are the Giant Magellan Telescope (gmt) to be built in Chile, the Thirty Meter Telescope (tmt) in Hawaii and the European-Extremely Large Telescope (e - elt), the location of which is yet to be determined. These large telescopes can change Indian astronomy. "At present, there's no access to instruments of their size that can do cutting-edge astronomy in optical sphere," said Bhattacharya.

With their massive optics, the three telescopes will look at fainter objects in the sky. They will look at stars that are the first sources of light after the Big Bang. They will look at periods when the first heavy elements formed. This will help scientists understand the "dark ages" of the young universe before stars lit it up. Optical telescopes so far have captured stars only in our galaxy. But the telescopes India is eyeing will help astronomers peer into other galaxies.

iucaa is one of the four research centres in India that has to decide which telescope India should go for. The other three are the Aryabhatta Research Institute of Observational Sciences in Nainital and the Indian Institute of Astrophysics and the Raman Research Institute in Bengaluru . gmt has a head start because its engineers cast the first mirror in 2005. But Bhattacharya points out that gmt also has a long way to go since it differs from the previous constructions of large optical telescopes. It will consist of seven mirrors of 8.4 metre diameter. This is the first time so many large mirrors are being put together to assemble a 25-metre aperture.

How far and how clearly an optical telescope can see depends on its aperture, the size of its light-gathering mirror/lens. Current largest optical telescopes have 10-metre apertures. It is prohibitively expensive to engineer a large single-piece mirror, so big telescopes assemble small mirror segments to get a large aperture. tmt will use hundreds of smaller mirrors to get an aperture of 30 metres. e - elt will have a 42-metre aperture. Their large apertures can help collect information on extrasolar planets and identify distant objects like supernovae, stars shining bright after exploding. Such information will help astronomers understand the expansion of the universe.

These telescopes are set to start experiments between 2018 and 2020.

Ajit Kembhavi, dean and professor at iucaa, likens them to a company with stakeholders to share the cost. "Everybody owns shares," he said. India plans to contribute 10 per cent to one project and get 10 per cent of research time.

A 10 per cent share can cost from US $50 million to US $100 million. India would like to make a majority of its contribution in kind; by developing and delivering a sub-system for the telescope, said Bhattacharya. India does not specialize in the engineering of novel mirrors used in telescopes. It can contribute to other optical elements, mechanical systems and the controls software.


Optical telescopes help astronomers scan only the visible light spectrum and the infra-red and ultraviolet spectra. But the universe talks to us through radiations stretching beyond these spectra. Radio telescopes look at frequencies much lower than that of visible light.

While India does not have the best optical telescope, the case is different for radio astronomy. About 90 km from Pune in an isolated patch with less interference from man-made radio signals, the Giant Metrewave Radio Telescope (gmrt) is an array of 30 radio telescopes.

In their simplest form, radio telescopes are like big dishes pointing at the sky. They have two main parts an antenna (the dish) that receives signals and focuses them at the focal tip of the dish, and a receiver that receives the signals from the tip. A signal-processing system converts these radio signals into images we can see on a computer screen.

One of the largest radio telescopes, gmrt collects signals from 0.047 sq km. Its dishes, spread as wide apart as 25 km, help it tune in to a large range of frequencies. One of its main functions is to understand the formation of galaxies by scanning radio frequencies from new and old galaxies. Radio astronomers can look back a few billion years.

gmrt has a niche from 250 MHz to 1,000 MHz, said Jayaram Chengalur, who specializes in using radio astronomy to trace the origins of galaxies. He is professor at the National Centre for Radio Astrophysics in Pune.

While gmrt has a large operating spectrum, it covers specific bands within that spectrum. Scientists want the telescope to have seamless frequency coverage between 30 MHz and 1,500 MHz. At present the system can sample a range of 32 MHz in one go. Scientists plan to increase this to 400 MHz. With increased sampling size, gmrt can get more signals from a source in one go. Scientists also plan to improve the system software and the sensitivity of the signal receivers. "No other instrument has its versatility in terms of (signal) collecting area and the capture of low frequency signals," said Yashwant Gupta, chief scientist at gmrt. "The upgrade will help us stay on the cutting edge."

gmrt's scientists are also part of the Square Kilometre Array radio telescope, a collaboration among 19 countries. As the name suggests it will collect signals from a square kilometre. It will scan a vast swath of frequencies from 100 MHz to 25,000 MHz. South Africa and Australia are competing to host the telescope.

While spread-out telescopes can resolve signals from a wider frequency range, a single radio telescope with a large diameter has a high sensitivity to very faint signals. The Five-hundred-metre Aperture Spherical Telescope (fast) being set up in southwest China will be 10 times more powerful than the current largest single-dish radio telescope, the 300-metre diameter Arecibo Observatory in Puerto Rico.

With its large collection area and heightened sensitivity, fast can help detect more and fainter pulsars, highly magnetized and rapidly rotating stars resulting from the gravitational collapse of massive stars. Pulsars emit radiation that is observed once during their rotation, making them mimic lighthouses. "One of the toughest challenges in astrophysics is to find a consistent theory as to why a pulsar shines," said Gupta.

Curiosity about unknowns like pulsars is what motivates scientists to build large telescopes. "One of the struggles is to keep the wonder alive," said Chengalur. "But it is the key."