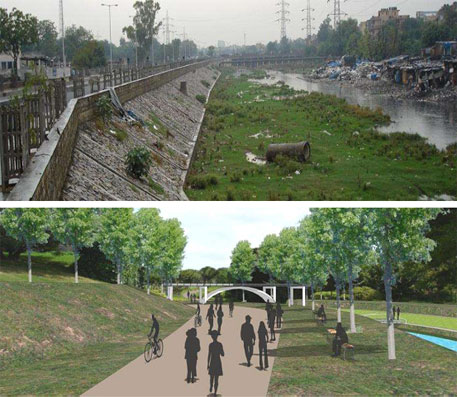 The nullahs of Delhi were once irrigation drains that watered the orchards scattered all over the city. Today, they are eyesores because they carry the city's sewage and filth. But it is possible to turn them into a major city attraction by developing them as landscaped green corridors that can be accessed by cyclists and pedestrians. A plan proposed several years ago to transform 350 km of drains in Delhi into eco-corridors that will have water treatment zones and walking-cum-cycling tracks finally seems to be moving ahead.

Recently, the Unified Traffic and Transportation Infrastructure (Planning and Engineering) Centre (UTTIPEC) cleared a pilot project—eco-mobility corridor or non-motorized public transport corridor—on either side of the Barapulla drain, costing an estimated Rs 16 crore. The nullah is one of the major drains of the city and connects major heritage zones of the city, including Humayun Tomb-Nizamuddin area and Mehrauli. The Jawaharlal Nehru stadium also falls in the way.

A quarter of the money for the project will be spent on treating the sewage in the drain, while the rest will be spent on cycle and pedestrian tracks. The tracks will be developed by raising both sides of the drain over a distance of 4.5 km. The idea is (as provided in the master plan) to ultimately convert all major drains of Delhi into green  corridors to connect pedestrians and cyclists with metro stations and bus stops, using the linear connectivity offered by the natural drains of Delhi.

Director of UTTIPEC Ashok Bhattacharjee says the project will serve two purposes: it will improve water quality as well as reduce traffic congestion by providing cyclists and pedestrians safe passage. If successful, the project will be gradually extended to the other drains that criss-cross the city.

Major hurdle
The work has yet to begin owing to the multiplicity of agencies involved, such as Delhi Development Authority (DDA), Municipal Corporation of Delhi (MCD), Public Works Department and Delhi Jal Board. No date is set yet regarding the actual take off the project. Savita Bhandari, director (landscape) with DDA, says, “I am optimistic of its implementation in the near future.” One possible option could be the constitution of a governing body to ensure coordination among the involved agencies, says Bhattacharjee.

One of the aims of converting these drains into eco-corridors is to unlock the potential of this neglected drainage network and utilize it to establish walkways, pathways for cycling and to create green spaces. With this intention, in 2007 a master plan was prepared for south Delhi with Infrastructure Development Finance Company as lead consultant. Over 280 hectares of land is available around the drains that is not being utilised at present.

The proposal also includes treatment of the wastewater using alternate technologies such as bioremediation and constructed wetlands at the source level. Three government bodies, including DDA, MCD and  Delhi and Delhi Tourism & Transport Department came together for its implementation. However, due to the high estimated cost (Rs 600 crore), the project could not be implemented.

The idea of a green corridor was first thought of in the late 1990’s when a group of women from Defence Colony Resident Welfare Association (Barapullah nullah passes through this posh south Delhi colony) felt that they must do something to keep the stinking storm water drain out of their sight. They decided that walls should be erected on both sides of the nullah. When Akash Hingorani, an architect who runs the Oasis Design Inc. came to know of this, he suggested a better solution.

“This (the walls) could have definitely kept the nullah out of the sight, but it would still be stinking and in fact could have created more problems both in terms of people using the walled area as a dumping ground, as well as a place for crime,” says Hingorani. He requested the Defence Colony RWA not to pursue this idea. He hit upon a more sustainable solution to get rid of the unpleasant sight of the nullah—develop the storm water drain into an eco-corridor.

Delhi’s natural drainage network is of 350 km in length. There are 19 major drains with over 15,000 sub-drains. The interesting part of this complex drainage network is that it provides a great opportunity to connect people and spaces to the current public transportation network. At present, these drains are a major issue of concern for Delhi as they perpetuate a number of environmental problems due the amount of untreated sewage that these drains carry. These drains carry more than 4,000 million litres a day of sewage, which is discharged into the Yamuna river, mostly untreated.

In 2009, Morphogenesis, another architecture firm also conducted similar research and made a similar proposal to the lieutenant governor’s secretariat; it aimed to utilise Delhi drains as an alternative cultural, environmental and transport network. However, it remains an ambitious idea given the level of planning and administrative coordination required among the government agencies and the stakeholders, particularly when considering its implementation throughout Delhi as per the master plan.