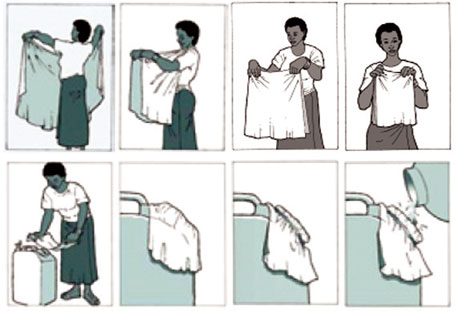 ACCESS to safe drinking water is one of the biggest health concerns in the developing world. The humble cotton sari and a little bit of sunshine might provide a simple solution, shows a study.

Though several effective water filters are available in the market, they are too expensive for most people, especially those in rural areas. The study by researchers from the Nimbkar Agricultural Research Institute in Phaltan, Maharashtra, shows that water can be purified just by filtering it through a cotton-sari and keeping it in the sun—even boiling is not required. For the study, published on February 25 in Current Science, the scientists obtained untreated water samples from the Nira Right Bank Canal in the Solapur district of Maharashtra.

According to the researchers, coliform bacteria are good indicators of the presence of disease-causing bacteria because they have a close relationship with them . Both microbes respond to the environment and water treatment in similar way. Presence of coliforms can be easily determined as they occur in large quantities in human faeces.

WHO data shows 2 million people die of diarrhoea every year due to unsafe water, sanitation, and hygiene and a vast majority of them are children under five. “The study is a remarkable achievement,” says Anil K Rajvanshi, corresponding author of the study. Water can be heated to 55°C using a solar cooker even on cloudy days, he says.

However, Thangam Menon, head of the department of Microbiology at Madras University in Chennai, does not think that pathogens in water can totally be eliminated this way because many bacteria that cause infections in the human gastro- intestinal tract are heatresistant and will survive the procedure mentioned in the study.

“The authors can probably conclude from their experiment that heating of water at sub-boiling temperatures (50–60°C) for a short duration after sari filtration can reduce the coliform count,” she says.