Scientists at Tubingen University, Germany, have dared to prove the impossible - that the human brain and its impulses could turn the computer keyboard and mouse into extinct species 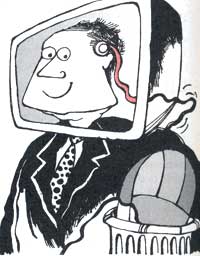 A WORLD where your computer's mouse is rendered redundant and the keyboard relegated to the dustbin of history may sound like an H G Wells fantasia. But researchers from Tubingen University in south Germany could soon be turning this fiction into fact.

"Most people can learn to control computers by manipulating brain waves," says Boris Kotchoubey, a Tubingen researcher. Tiny scalp electrodes are fixed on to the person communicating with the computer. The electrodes are connected to an amplifier, which measures the brain's impulses and a computer which analyses patterns received from the brain. The analysed information is then fed back to the person in the form of moving rockets or balls.

Researchers hope that the technique genuinely benefits humanity rather than remaining an interesting curiosity in electronic entertainment. Very fancy applications ranging from the construction of special fighter planes to neurological therapies are being envisaged.

However, the idea has its fair share of critics too. Although the participants in Tubingen are trying to attain a certain degree of control over the two dimensional cursor, it is difficult for even those who have achieved this to assure similar results every time. "There is skepticism because for some people, the work seems to be a little abstract. The ability to perform tasks can be unreliable and there is no way of confirming exactly what the subjects of research are doing," opines Kotchoubey. The fact that amplifiers and the levels of training required for basic two-dimensional control, cost a lot, compounds the problem further.

Even though replacing the mouse and the keyboard with humans may take some time, the technique could offer exciting possibilities for the severely handicapped as a viable communication-cum-word processing system. Researchers are speculating that if patients could be trained to manipulate mental activity, certain neurological disorders could be 'learned away'.

Scientists in Britain, Germany and the us are also studying the prospects of treating schizophrenia, depression, epilepsy and hyperactivity using this technology. To combat epilepsy, researchers at Tubingen University are trying to train patients to block electrical activity in the brain that leads to a fit. Their experiments are bearing fruit. Most patients have been able to master the task of doing so and some have even shown a decrease in the frequency and intensity of fits.

"I think the technique could be very effective if the patients practice the relevant skills regularly," believes Kotchoubey. And many of his patients do enquire if they could purchase small feedback units. Further research in the field holds a lot of promise, particularly in treating different neurological disorders. But thought-controlled fighter planes: will these ever take-off?. Time Will tell.