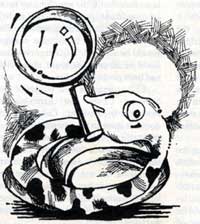 THE anaconda - the world's largest snake - carries the notorious reputation in folklore of being a monstrous, man-eating reptile that exhumes poisonous gases. It is also known to hypnotise its human victims. The species (Eunectes murinus) is found throughout South America's Orinoco and Amazon river basins. Scientists are now trying to untangle fact from fiction with the help of results from what they say is the first field study on the animal.

Researchers from the Wildlife Conservation Society in New York, headed by conservation biologist John Thorbjarnarson, are studying the creatures in a ranch called Hato El Cedral in Venezuela's illanos (savannas). They are conducting the study along with biologists from Venezuela's wildlife department, Profauna. Although the study is still in the initial stages, some interesting facts regarding the behaviour of the reptile have come to light. For instance, the act of mating involves a single female and about a dozen smaller males, in what is termed as a mating ball. This behaviour has put the scientists in a quandary as to which male ought to be associated with the offspring. Jesus Rivas, an ecologist at the University of Tennessee in Knoxville, us, is working out the paternity problem through DNA tests.

Another fascinating facet of the snakes is that inspite of being super predators, they are sometimes a bit reckless in their ways. Although they normally feed on docile ducks, they could encounter 'dangerous' food too. The anacondas typically subdue their victims by squeezing them with a vice- like grip and then asphyxiating or drowning them. It is the practice of swallowing prey that gives rise to problems. Anacondas usually swallow the prey's head first, but could get injured if the victim struggles to free itself. According to Thorbjarnarson, the appetites of some snakes outstrip their intellect. For instance, he has observed a dead deer Whose antlers bore marks of the anaconda's teeth. Apparently, the snake ma@e an unsuccessful attempt at swallowing the deer's head first but then gave up because of its antlers. It is also known that some snakes have ripped themselves into two halves, while trying to swallow@ turtles with razor-sharp carapace (upper shell). Though it is rumoureei,that anacondas can eat humans, there is as yet no scientific evidence to prove the same.

The study also revealed that a pregnant female eats little or nothing and still bears 78 or more offspring. In order to study the range of these snakes, the anacondas were tagged with radiotransmitters. It was found that during the dry season, the snakes roamed a fixed area, which they visited each year. Males and non-pregnant females were found in an area roughly measuring 20 ha. The pregnant female was content with remaining rather sedentary, till the time she delivered her young ones.

Biologists involved in the study are also devising ways and means to control and subdue the anacondas which are to be transported to laboratories for study.