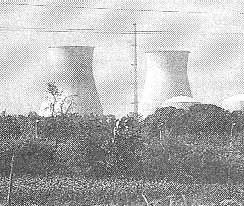 Nuclear power seems to be losing its charm in the corridors of power. The first indications of this came in the third week of August, when the Union government, unhappy with the performance of the high-cost nuclear power plants, announced its intention to put on hold all atomic energy expansion projects.

Planners feel that it would be more beneficial to pump money into the more efficient hydel and thermal power generation systems, that have a low gestation period. As such The Atomic Energy Corporation's (AEC's) Rs 8,000 crore Tarapur expansion plan has already been deferred. AEC had sought funds to set up a 1,000 MW unit at Tarapur for the second stage project, but the finance ministry, reportedly with the backing of the prime minister's office, has not acceded to the request on the plea of paucity of funds. The rethinking on atomic energy expansion had become imperative, as a group of ministers had recommended that long-delayed projects with massive cost overruns should be reviewed. These include the Kaiga plant which is likely to be completed by December 1996, 1 year behind schedule.

Meanwhile, on August 22, responding to a deposition made by P Vishnu Kamath, on behalf of the Samaj Parivartan Samudai, Union environment minister Kamal Nath said that he favoured a public hearing on the 235 mw Kaiga nuclear power plant. Kamath had alleged that the Kaiga plant was being constructed in violation of criteria laid down by the ministry. He said that the construction work on the plant in the biodiversity-rich Kaiga area had commenced way back in 1985, though the environment clearance was secured only in 1992. He also claimed that the environmental impact assessment of the plant was incomplete. Nath gave an assurance that the matter would be referred to his ministry's expert committee on nuclear issues.