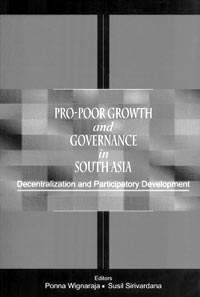 Six key expressions -- pro-poor, growth, governance, South Asia, decentralisation and participatory development -- constitute the title of the book under review. The broad sweep of South Asia finds a ready definition in South Asian Association for Regional Cooperation (saarc). It embraces Bangladesh, Bhutan, India, Maldives, Nepal, Pakistan and Sri Lanka, and Iran and Afghanistan can also be included. Of the lot, the Maldives belongs to a slightly different category, while research on Bhutan is a trifle difficult. Hence, this book, a product of South Asian Perspective Network Association, a South Asian network of individuals and institutions, is principally about Bangladesh, India, Nepal, Pakistan and Sri Lanka. There are three parts to this book -- the first sets out the conceptual framework; the second, comprising six case studies, provides the meat and the third draws policy lessons from the cases.

Poverty has countless definitions. Income poverty, defined as the percentage of population below a certain poverty line (the poverty ratio or the head count ratio), although overwhelmingly used, is at best an imperfect indicator of poverty. Other indicators abound, associated either with education (enrolment ratios, literacy) or health (life expectancy, infant mortality, maternal mortality) or hunger or even the performance of relatively disadvantaged sections (based on gender or caste or religion). Although more difficult to quantify and measure, definitions linked to the participation of the poor in decision-making processes are not hard to come by either. In fact, these are used in the Millennium Development Goals to be attained by 2015, and in publications such as the Human Development Report. Whatever the yardstick, fact remains that South Asia's performance is rather dismal; more so, if Sri Lanka is excluded.

So what can be done to change the status quo? Growth is necessary, but is it all that is required? The composition of growth is equally important and this feeds into the concept of governance. Governance is a much-used expression but one that elides all attempts at a consensual definition. After all, the definition, most often than not, becomes a function of what one expects of government. Throughout South Asia, government is expected to do thirty different things. Ideally, there ought to be consensus over core governance functions -- law and order, basic education, health, drinking water, irrigation facilities, sanitation and sewage treatment, electricity and roads. It is only after these are taken care of that the government can be expected to do the twenty remaining things.

Most of these core governance functions are what economists call public goods (or services). They are efficiently delivered at a certain level; beyond this diseconomies of scale set in. Throughout South Asia governance has been a very centralised affair. But decentralisation should be encouraged. It increases accountability and transparency and checks corruption, especially if spliced with rights to information acts and citizen charters. Efficiency of government expenditure begins to be judged through tangible improvements in outcomes, rather than expenditure itself being used as a yardstick. But does decentralisation guarantee participation in the planning process?

It doesn't and there is a lot of literature now about what is called "capture" at the local body level. That's where countervailing pressure comes in. There can be an argument, like the one substantiated in the Kerala paper by Madhu Subramanian in this volume, that local self-governance can also occur as a result of volition from above, rather than through social mobilisation. However, there is no denying that countervailing pressure often catalyses the process, and is facilitated when governments are receptive.

The six case studies from five countries (two case studies from India) offer instances of such successful participation. And while one can think of many other cases that could have been included the question to think over is -- what are the preconditions for such success? How does one ensure replicability? Why are instances of success from Bihar rare? What are the lessons to be drawn from the instances of failure that remain undocumented? The answers are difficult, perhaps impossible. Which is perhaps why they are never given, making the concluding chapter read like a taxonomy. Nonetheless, this is an interesting book to read and to think about.