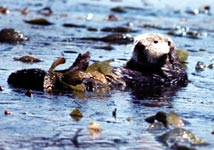 Clearly, a cat's waste is an otter's poison. Southern sea otters in their prime are dying in huge numbers off the California coast in the us due to a mysterious disease that marine biologists think can be linked to cat faeces in the sewage dumped into the ocean.

Scientists at the University of Davis's Wildlife Health Center are worried because the population of this particular species has been dwindling since 1995, with only 2,000 surviving today.

A study conducted by the centre, which investigated 105 otter carcasses washed ashore between February 1998 and June 2001, mentioned that 64 per cent of them died of some form of disease. Out of these, 47 per cent were between four and nine years old -- their breeding age.

The deaths were mainly at two Californian beaches -- Morro Bay and southern Monterey Bay. More than half the otters found dead along Morro Bay had been infected by two protozoal parasites -- Toxoplasma gondii and Sarcocystis neurona -- which cause encephalitis (fatal brain infections). The only known source of these parasites is the faeces of two land mammals -- domestic cats and opossums. The second cluster at Monterey Bay died due to infections caused by thorny-headed worms called acanthocephalans .

The study also shed light on how toxoplasma- infected otters were four times more likely to suffer seizures and be killed by sharks.