Falling prey to the evil weed 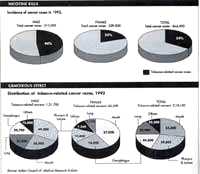 TOBACCO came to India in the 17th century with the Portuguese and today, the plant is grown over as much as half a million hectares in the country.

India was one of the first countries in the world to report the adverse health effects of tobacco use. In 1902, the Indian Medical Gazette reported about a third of all cancer admissions to Madras general hospital were cancer of the cheek, which is associated with tobacco chewing. In 1992, there were an estimated 2,18,100 new cases of tobacco-related cancers in India -- 34 per cent of all cancer cases in the country.

Data collected by the Indian Council of Medical Research indicate that if all forms of tobacco use are taken into account, 30-70 per cent of all men and 15-50 per cent of all women consume tobacco. However, a 1987-88 survey by the Sample Survey Organisation showed that on a national basis, average tobacco use prevalence is 36 per cent in men and 12 per cent in women. Mortality rate in tobacco users is 1.4 to 1.6 times more than in non-users. Thus, about 800,000 deaths a year can be attributed to tobacco use.

It is cheaper to prevent tobacco-related diseases than to treat them. On an average, a cancer patient spends Rs 4,000 before diagnosis, and another Rs 7,000 on treatment, even when income loss because of illness is not taken into account.