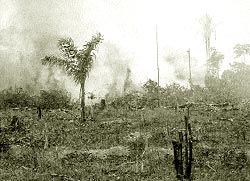 countries wanting to escape their obligation of combating climate change have always projected the Amazon rainforests of Latin America as the key absorbers (sinks) of polluting greenhouse gases. But this notion may be disingenuous, indicate scientific discussions held during a recent international meet. During the mega-event a controversy raged about how much greenhouse gases the mighty Amazon emit. Ironically, scientists were unable to reach a consensus even after three days of dialogue.

The aim of the conference was to discuss the latest findings of projects being executed under the Large Scale Biosphere Atmosphere Experiment in Amazonia (lba) -- the world's most comprehensive study on deforestation. The research, which began in 1998 and is expected to continue through 2006, seeks to examine the interactions between the rainforests and regional as well as global weather patterns. It involves more than 1,000 scientists and specialists from over 100 research institutes that are based in Latin America, the us and Europe. The exercise is made up of 120 projects, 61 of which are already complete.

Participating in the conference convened in Brasilia from July 27-29, 2004, Philip Fearnside of Brazil's National Institute for Amazonian Research said that the findings of a project showed that the greenhouse gas emissions of the Amazon in 2003 were more than 400 million tonnes -- a figure nearly 60 per cent higher than the previous estimates. Logging and burning were mainly responsible for the crisis -- the Amazon lost about 2.4 million hectares of its forests in 2003 alone. Fearnside asserted that the earlier projections had failed to take into account a big culprit -- vast tracts of forests submerged under water due to hydropower projects. The rotting vegetation now emits very high levels of methane. As per Fearnside, Amazon's four dams together emit more methane than Sao Paulo, Brazil's largest city.

But Fearnside's prognosis was challenged by many scientists, including Carlos Nobre of Brazil's National Institute of Space Research. As per Nobre, the basin's emissions were not more than 250 million tonnes in 2003. His research also indicates that the continuing devastation of the area will convert the biodiversity hotspot into a vast, grassy savanna in 50 to 100 years. "In the worst case, the forest may lose some 60 per cent of its area. In the intermediate case, 20 per cent of the area will disappear," informed Nobre. "Even without deforestation, global warming could cause a 'savannisation' of 20-30 per cent of the rainforests," he added.

Such findings have important political ramifications, especially for Brazil, as it is expected to publish an inventory of its emissions this year as required by the Kyoto Protocol. If Fearnside's figures are anywhere close to reality, the country has a problem at hand -- it means that the Amazon, most of which fall in Brazil's territory, will be seen as emitting more noxious gases than absorbing them. High emission levels even mean trouble for others -- the forests cannot be used for carbon trading, as desired by the industrialised world, particularly the us.