The drawbacks of modern, high-yield crops are prompting farmers and researchers to go back to traditional, well-adapted varieties. 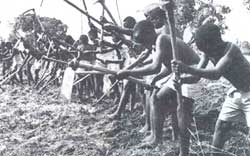 WHEN ZIMBABWE abandoned its traditional, drought-resistant maize in favour of new, high-yield varieties, it sowed the seeds for a famine that obliterated about half of the country's staple food crop this year. Failure of the rains is only part of the story: Farmers in Zimbabwe -- until recently regarded one of Africa's agricultural success stories -- had been persuaded and even forced to adopt modern hybrid varieties of maize that grow well when the rains are good but succumb to drought faster than the traditional grains.

Now, calls in Zimbabwe to revive the forgotten grains echo in many other countries in Africa, Asia and Latin America, where a handful of modern "high-yield" varieties of maize, wheat and rice -- products of the modern green revolution -- have left farmers more vulnerable to quirks of climate or a new pest.

Rodger Mpande, a former agricultural official for the Zimbabwe government, said in London recently 95 per cent of his country's maize are hybrid varieties that require large quantities of moisture at specific periods to survive.

"The government's Agricultural Finance Corporation won't give loans to farmers who don't grow hybrids," says Mpande. It has forced out traditional varieties that farmers had developed over the centuries, through constant crop selection and breeding, to cope with local conditions.

In a new book, Growing Diversity, Andrew Mushita, an agronomist with the independent Zimbabwe Seeds Action Network, says: "The past three years of drought have demonstrated the value of sorghum and millet in afflicted areas." On the poorer, drier soils of the "communal lands" where most farmers work, hybrid maize has "proved disastrous during the drought years."
The Research Council of Zimbabwe has recently begun to investigate the attributes of hundreds of traditional varieties of sorghum and millet. Their yields may be lower than the new hybrids, says Mushita, but on poor soils, and where climate is unreliable and money for chemicals is short, they may do nearly as well in a typical year -- and are far less likely to fail when the rains do not come.

Zimbabwe's reinvestigation of farming traditions starts it on a road taken by Ethiopia during its famine in the early 1980s. Melaku Worede, director of the Planet Genetic Resource Centre of Ethiopia and head of an FAO commission on plant resources, says: "During the drought, we sent out rescue missions to collect native seeds."

The fear was that thousands of local varieties could be lost forever as hungry families ate the seedcorn for the next year's crop. "We needed to salvage the genetic resource material for ourselves and the rest of humankind and help ourselves stand on our own feet," says Worede.

Ethiopia has a greater genetic diversity of traditional plant varieties than almost anywhere else. "This genetic diversity didn't arise by accident," says Worede. "It was the genius of the farmers." But varieties with attributes such as resistance to pests, early maturing and drought resistance are still being lost. Native barleys and traditional durum wheat, says Worede, are giving way to high-yield varieties of wheat for making bread. But after the Ethiopian drought was over, Worede fought back. "We decided to plant seeds on selected farms and grow them using traditional methods, without chemicals." These field gene banks have helped revive farmers' interest in selecting their own plants to meet local needs and conditions rather than rely on uniform hybrids.

Recent research has shown how versatile farmers can be in adapting to drought conditions. Michael Mortimore, a Briton, has documented how Nigerian farmers have successfully introduced more drought-resistant crops -- finding new varieties of millet and five types of sorghum in neighbouring Niger, for instance. These varieties, he says, "bear no resemblance to varieties promoted formally" by the government.

Some scientists in the Third World are now starting to protect what remains in their fields. At the University at Los Banos, researchers have spent five years investigating traditional varieties of rice with Filipino farmers. One previously ignored variety, discovered by a farmer, has been turned after a few years of careful selection into a best-selling seed in local markets. Called Borgadol -- meaning short, solid and strong -- it yields around 20 per cent less grain than the high-yield variety promoted by the government, but it is prized by farmers because it requires only half as much fertiliser, smothers weeds, is less prone to attacks from local pests and tastes better.

Similar schemes are being developed in Latin America to preserve the potato in the Andes. Andean farmers traditionally cultivate up to 50 potato varieties in a single field and plant wild varieties along the edges of fields to promote cross-pollination.

"Wild and weedy relatives of crops often grow in a much wider range of ecological conditions than the crops derived from them," says Chilean agronomist Miguel Altieri, now at the University of California at Berkeley, USA. "Constant cross-pollination with them gives domesticated varieties greater tolerance to extreme conditions on the wild mountainsides of the Andes." But in recent years, governments have tried to halt this practice.

Since the 1940s, the Chilean government has encouraged farmers to replace their traditional potato varieties with "improved" versions developed in Europe. But, as these European versions have increasingly been struck by disease, researchers such as Altieri have begun collecting and distributing indigenous potato varieties once again. At one community garden, 96 varieties are being grown and improved through breeding.

Growing interest in organic farming in the West has turned such apparently arcane research projects into the height of fashion -- partly because traditional varieties grow best without heavy doses of pesticides or fertilisers. "To start with, our research group was marginalised by academia," says Altieri. "But now universities and international centres are coming to our door because we have done what they now want to do."