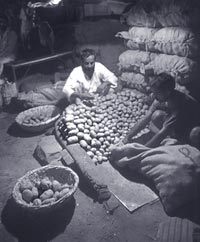 while agriculture ministers of most states have responded positively to the reforms proposed by the Union ministry of agriculture (moa) in farm produce marketing and land policy, some of them are apprehensive about opening the markets to private operators and in respect of land reforms. At a conference organised by the moa in New Delhi on January 7, the state ministers also expressed an urgent need for setting up an institutional framework to settle land disputes.

Discussions were held on the Model Act at the meet chaired by Union agriculture minister Rajnath Singh. The act is an outline created by the moa for states to draft legislations to amend their respective Agriculture Produce Marketing Committee (apmc) Acts. Agriculture being a state subject, the implementation of the reforms rests with the states.

At present the state governments control agricultural marketing through a notification system. "This monopoly of the state was brought in to prevent the exploitation of farmers by unscrupulous private operators. But the system is now controlled by agents," says P K Agarwal, joint secretary (agricultural marketing) in the moa. As farmers are not in touch with actual buyers, the supply of high-quality produce in the market is affected. The farmers are also prevented from getting the best possible prices, adds Agarwal.

The Model Act provides a framework to make direct procurement of agricultural produce from farmers easier through private markets and private operators. The moa also expects that the private sector would bring in the much-needed investment in the agricultural sector. But Punjab and Haryana, which have highly developed agriculture markets, fear that the reforms would result in a loss of Rs 400 crore to the state exchequer. Assam, meanwhile, is worried that the poor agricultural markets of the Northeast would not attract the private sector.

"Almost all the other states are positive about these reforms," reveals Agarwal, adding that the state laws are likely to be in place in two years. Kerala, in fact, has already drafted an amendment based on the Model Act.

The land reforms package features systems like land leasing, contract farming and 'land share companies'. It provides for allowing small, landless farmers tenancy rights for, say, one season. This would enable them to take credit from banks for inputs like quality seeds. However, the ministers of West Bengal and Andhra Pradesh feel that these reforms could lead to the concentration of land ownership in a few hands. Agarwal is of the view that before these reforms are formalised, an institutional framework -- envisaging safeguards such as involvement of gram panchayats -- should be developed to settle disputes without seeking the intervention of civil courts.