Group has 1,750 farmers says pollution from industries has reduced them to poverty and political parties in power ignored their repeated pleas 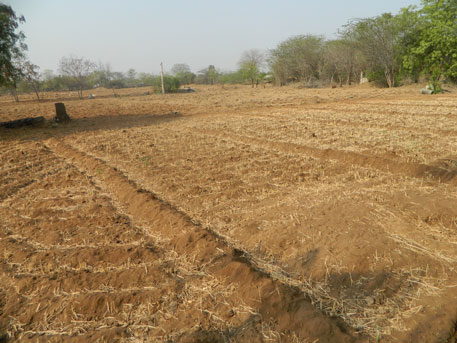 Ninety-five-year-old V Ammayappan is just back home from hospital after a kidney surgery. But this farmer from Melapalayam village in Tamil Nadu's Karur district is determined to cast his vote on April 24 when elections to Lok Sabha will be held in his state. He speaks with clarity and conviction about how he is going to exercise his rights as a voter. "This time we're going to reject all the candidates contesting election in our constituency. We will resort to NOTA (none of the above) provision," he says calmly.

By "we" Ammayappan refers to the members of Karur Mavatta Nilathadi Neer Padukappu Sayakalival Pathikapetta Vivasayikal Sangam, a group of farmers affected by the dyeing and bleaching industry in Karur, a textile town with thriving global business. Karur is known for its home textiles-bed linen, kitchen linen, toilet linen, table linen and wall hangings. The town exports textiles worth about Rs 6,000 crore a year. 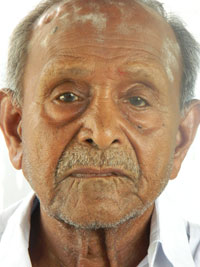 The group, formed in 2003, has been waging a legal battle against the pollution from the factories. The group has 1,750 farmers as members. "The decision to exercise NOTA was a collective decision," says 72- year-old K Ramaswami from Karuppampalayam village, president of the group (Ammayappan is the vice-president of the group).

"The industry has been causing grave damage to our farm lands, drinking and irrigation water sources and the environment while successive governments and political parties directly or indirectly supported the industry and ignored our woes," says Ramaswami.

The group has members from 30 villages located along 25 km on the two banks of the Amaravathi river, a tributary of the Cauvery river. According to the sangam members, the industry has caused damage to about 25,000 hectares (ha) of farmland.

Farmers in the area used to grow paddy, turmeric, sugarcane, sunflower and sesame by drawing water from the Amaravathi through channels. "We used to grow paddy more than enough for our consumption and sell it outside," recalls Ammayappan, who has four ha of farm land.

The dye and bleaching factories started coming up in the beginning of the 1990s. "At that time, the volume of business was low and the industry was not that much mechanized," says Ramaswami.

But slowly the scenario started changing. The global textile business grew. Dye and bleaching factories mushroomed. The number of factories grew to about 500 factories. Most of them were located on the banks of the Amaravathi river. Many of them did not obtain the mandatory approvals from the concerned government departments, including the Tamil Nadu Pollution Control Board (TNPCB). They took water from the river and discharged untreated or inadequately treated effluents directly into the river. "There were about 10 big factories. Some of them had even dug tube wells to a depth of 275 metre and discharged effluents into these wells. They also discharged waste water into lands they bought from farmers," says Ramaswami. This caused contamination of groundwater in the area.  According to the members of the group, about 250 big open wells from which they used to draw water for drinking as well as irrigation have been contaminated.  Soil turned infertile; yield of the crops came down; slowly the farmlands became barren.

Farmers were able to grow only coconut and even the yield of coconut became very low, say the farmers.

"Water in the river became so contaminated that even cattle which drank the water fell ill and died," says R Sankar, a farmer from Melapalyam. In his village alone, 500 cattle have died due to contamination of water, says he.  "We were not against the industry in the beginning. But when our livelihood started affected and our families ended up in penury, how can we keep quiet?" asks Ramaswami.

So, they started raising their voices, submitted complaints to the authorities, including the Karur district collector, revenue divisional officers, the state pollution control board, the health department and the Tamil Nadu Drinking Water Supply Board. "Whenever we protested, a meeting of farmers and those from industry would be called. The authorities and officials concerned would merely direct the industry to install effluent treatment plants. The industry would agree but would continue polluting water sources and the environment," says S Ramalingam, secretary of the group. Some of the factories were closed for a couple of months and they were again given permission to operate. There has never been strict and regular monitoring by TNPCB, say the members of the group. 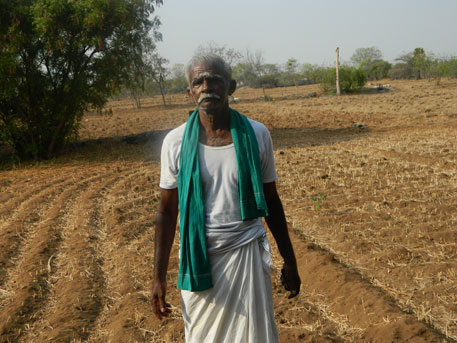 Finally, in 2003, the group moved the Madras High Court against the pollution, demanding compensation. In 2004, the Central government's Loss of Ecology (Prevention & Payment of compensation) Authority appointed an expert team for Amaravathi and Noyyal river basin for conducting a detailed survey of the affected villages and assess compensation to be paid to the individuals. The expert team conducted an assessment of the loss for 1996-2004. As per the authority's assessment, the total area affected was 14,164 ha in 41 villages. The total compensation amount recommended by the authority was R 6.37 crore, which according to the farmers was much lower than the actual loss.

The dyeing industries paid Rs 39.52 lakh as the first installment and subsequently in 2005 moved the court for a revision of the compensation and secured an interim stay on paying compensation. The Karur farmers, too, filed a writ petition in 2006, praying for an interim order for award passed by the Loss of Ecology Authority, re-inspection of the affected agriculture land and revision of the compensation amount.  "Till date we have not received a single paisa as compensation from the industry," says Ramalingam. More importantly, the farmers say, they are unable to get to know even the status of the case. "The court has informed the district authorities that the case is still pending. But we don't know whether the case is still pending or closed," says Ramaswami.

As a result of the continuous legal battle by the group, in 2009, the High Court ordered TNPCB to hold strict monitoring and serve closure notices to those industries which had failed to install effluent treatment plants. The industries pleaded for time and continued discharging effluents. In 2011, the group again approached the court, highlighting the contempt of court order. Subsequently, 459 dyeing units were closed down. In 2013, 54 factories were given permission after they installed effluent treatment facilities. "The court ordered zero discharge of effluents into the river.  Some of the operating factories still discharge the wastewater either into the nearby canals or into their own land. We have to keep a constant watch on them and continue fighting against pollution," says Ramaswami.

According to the farmers, the factories which were closed down have shifted their machinery and some of them are operating at places like Salem and Erode. When farmers are unable to grow crops, brick kilns have started coming up in many spots. 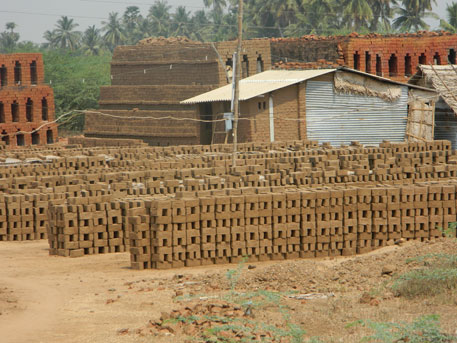 "We're not against the industry. The industry should function but they have to comply with the laws. There should not be any pollution or contamination of air, water and soil," says Ammayappan. Farmers point out that health status of the people in the affected villages has deteriorated. Kidney disorders, cancer and abortion are high in the affected villages, point out the farmers. In the past few years, a number of small and big clinics, nursing homes and hospitals have come up in and around Karur town. "And they call it development," laughs Ramaswami.

Sand has been completely removed from the Amaravathi and the riverbed has only rocks, stones and pits. Indiscriminate sand mining in the Cauvery is still rampant, they point out.

Interestingly, according to the group members, both AIADMK and DMK have offered them money, pressurising them not to exercise NOTA. "They have offered upto Rs 2,000 a vote," says Sankar. "But none of us is going to bite that bait."

Research: Assessment of groundwater pollution and its impact in and around Punnam Area of Karur District, Tamilnadu, India