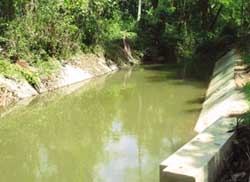 In January 2006, two farmers of Alur village in Chamaranjanagar of Karnataka won an unprecedented consumer case, in which water supply authorities were held guilty of negligent services in providing dam water to consumers. The duo was awarded very meager compensation for their losses , but it proved to be a major victory for the small farmer.

Alur lies on the banks of the river Suvarnavati and is known for its orchards, believed to have been were planted by the rulers of the Chola dynasty about 1,000 years ago. Areca trees may have replaced coconut trees, but the traditional banana harvest is still brought in.

In 1966, the state government decided to construct a dam on the river to irrigate 7,000 additional acres of land for cultivation. The farmers of Alur village opposed the construction of the dam, some 20 km upstream. The small and medium farmers follow a diversified cropping system. They grow paddy using modern agriculture but old orchards continue bearing fruit.

The government gave written assurances of continuous water flow from the dam. In all, 2,100 hectares (ha) of paddy and 730 ha of semi-dry crops were assured water from the dam. But between 2002-2005, the authorities declared a drought in the area and refused to release water. In all, about 4,000 ha of land belonging to farmers in 40 villages was affected. Only newly irrigated land was supplied adequately.

On April 8, 2005, Mahesh Prabhu, a coconut farm owner, filed a complaint in the District Consumers' Disputes Redressal Forum at Chamarajanagar, and was joined by Mamatha Murthy on September 21, 2005.

Prabhu and Murthy demanded compensations of Rs 490,000 and Rs 291,000 respectively. Their main contention was the government had to pay for deficiency of service to farmers who were consumers.

On January 19, 2006, the court ruled in their favour. The farmers were declared consumers and the state dam authorities were declared service providers. The tribunal, led by M G Hiremath, president of the District Consumers' Disputes Redressal Forum, awarded a compensation of Rs 5,000 each and a nominal amount to cover mental agony and court charges.

This has set a precedent for farmers all over the country who can now ensure that they get their entitlement. "Farmers are stakeholders in dams and irrigation projects, since they pay a betterment charge to help build dams," says Mahesh Prabhu.

The first question which the court addressed was whether the complainants were in fact consumers within the ambit of Consumer Protection Act? Murthy and Prabhu proved beyond doubt that they were indeed consumers by citing Rule 4 of the Karnataka Irrigation Rules, 1965, that specifies the water rate of approximately Rs 2 to Rs 45 per hectare, be collected.

All farmers pay the government betterment charges, maintenance cess and water rate for supply from the reservoir. The water rate varies and is charged differently based upon usage. This formed the basis of the complaints filed by Murthy and Prabhu. The complainants argued that the water rate was not a tax but payment for service rendered. The court upheld this view and ordered that "as such they are rendering service for a consideration and the complainants Murthy and Prabhu were consumers".

Once this contentious issue was resolved, it was necessary to see whether the complainants could further prove that the defendants had caused deficiency of service. This is where the government's hundred percent assurance to the farmers of Alur came in handy.

The engineers pleaded that illegal drawing of water from the canal and unlawful sand quarrying in the riverbed were causing water shortage to the orchards. Since canal maintenance was the government's responsibility, it was ruled that the government officials had failed to discharge their duties. For Murthy and Prabhu, the victory is one of principle. The compensation was low for lack of substantiation by the horticulture department.

It is quite likely that the government will appeal the judgment of the consumer court but the duo is ready to ensure that this time around they are justly compensated for their losses.