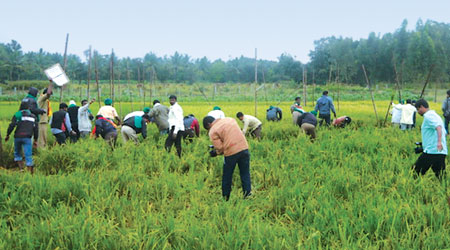 ABOUT 100 farmers in Karnataka destroyed a paddy field where multinational seed major DuPont was conducting field trials for genetically modified (GM) rice in collaboration with University of Agricultural Sciences Bangalore. The police have arrested 12 farmers for vandalism and trespassing.

The trial was on about a hectare field at Krishi Vigyan Kendra in Doddballapur, some 40 km from Bengaluru. In September the Genetic Engineering Approval Committee, the nodal agency for clearing GM crops in India, gave its permission to conduct the trials. The farmers alleged they were not informed. The officials did not seek the necessary permission from the local panchayat body before conducting the trials, said H Nagaraj, a panchayat member. Only a few farmers whose land adjoins the Krishi Vigyan Kendra were warned not to plant paddy this year, he said. “No one gave them any reason or explanation for this,” he added.

Farmers’ movement group Karnataka Rajya Raitha Sangha (KRRS) alleged the officials did not mark the area as GM field, which is mandatory while conducting field trials for GM crops. They had only put uninformative code names to mark the area. The farmers came to know about it when A Venkatesh, a volunteer of campaign group GM-Free Karnataka, visited the Krishi Vigyan Kendra campus. Upon casually enquiring about the new paddy variety, the officials said it was a GM paddy.

Following Venkatesh’s tip-off, the farmers stormed the field in the early hours on November 17. They slashed and burned 75 per cent of the crop. Since the trials were going on in the open air, it could have contaminated rice varieties in nearby areas, said Venkata Reddy, vice president of KRSS.

Following the incident several farmers groups in the state have demanded that Karnataka be declared a GM-free state. “The state has 360 local varieties of rice adapted to a wide range of weather.

Their yields are comparable to several high-yield varieties and they have high nutritional value,” said G Krishna Prasad, director of Sahaja Samruddha, an organic farmers association. Karnataka does not need GM rice, he added.