Facing losses due to low prices of cotton and groundnut, farmers planned a rally last Sunday to catch the government’s attention 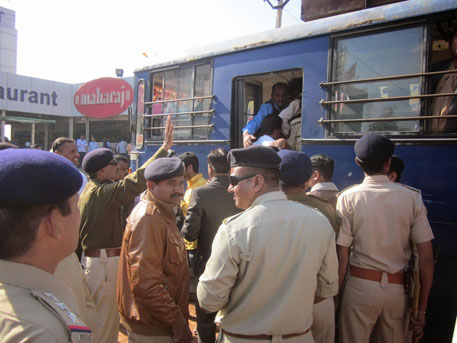 Gujarat police continues to crack down on farmers protesting against the Bharatiya Janata Party government in the state and the Centre for not ensuring fair returns for cash crops such as groundnut and cotton. In the early hours on Sunday, police detained several leaders from the farming community and put them in preventive custody. Police officers justified the move, saying it was to prevent any untoward incident in and around the state capital, Gandhinagar, which is hosting Vibrant Gujarat Investors’ Summit. The event, which ends today, was attended by the secretary general of the United Nations, Ban Ki-moon, among others. Foreseeing their detention, the farmers had petitioned the Gujarat High Court on January 9, seeking directions to be allowed to hold a protest rally against the Gujarat and the Central government.

Among those detained were 54-year-old Sagar Rabari, leader of farmers’ organisation, Jameen Adhikar Andolan - Gujarat (JAA-G), and Lakhan Musafir. They were kept in preventive custody till Sunday evening. According to Rabari, leaders of JAA-G were followed by plainclothes police personnel since January 8. In some cases, Local Intelligence Bureau officials detained farmers travelling in private buses when they stopped on the highways for a break. “Since this protest rally was a statewide call to the farmers, I started mobilising farmers from various parts of Gujarat. I noticed that many farmers who wanted to be a part of this peaceful rally were detained as soon as they stepped out of their respective villages to take part in the rally. This shows that the police officials were following us right from the beginning,” says Rabari, who has accused the government behaving in an undemocratic way.

Ahmedabad activist and author, Persis Ginwalla, was detained when she was returning from the protest site. “I was being followed by a patrol car which asked me to pull over. I complied immediately. Then I was taken to Adalaj Police Station in Ahmedabad, where I was detained for an hour,” says Ginwalla.

Gujarat Police said the arrests were necessary to prevent chaos or untoward incident in and around Mahatma Mandir, the site of the Vibrant Gujarat Summit in Gandhinagar. “Further these protestors did not have permission to hold any rally,” said a senior police officer from Gandhinagar. JAA-G had filed a plea in Gujarat High Court, seeking direction to hold a march in Gandhinagar. “The court sent notices to Gujarat government and the date for the hearing has been fixed on January 15,” says Ginwalla. Now JAA-G plans to file an affidavit about the manner in which farmers were prevented from gathering in Gandhinagar. “We will continue to protest this loot being promoted by the government in name of investors’ summit and development of Gujarat and nation,” said JAA-G in its press note. 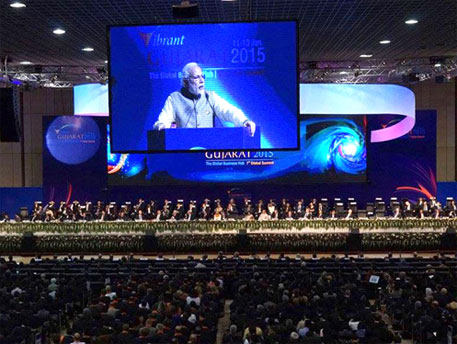 The petition states that when the farmers sought permission on January 3 to hold the rally, the Gujarat government refused to grant permission, saying there were instructions from Prime Minister's Office (PMO) that no procession should be permitted during Vibrant Gujarat summit. The petition alleges that the application to hold the rally was kept pending. The petitioner, Rameshbhai Virani, vice-president of Gujarat Khedut Samaj, a farmers' rights organisation, said that right to express dissent is a fundamental right. By instructing Gujarat government not to allow any procession, PMO is violating fundamental rights. The petitioner has also questioned the district superintendent of police, Gandhinagar, for imposing Section 144 CrPC (banning assembly of more than four persons). "This notification itself would be self-contradictory since in the summit the government and BJP is collecting people in thousands to attend it."

The arrests are not a one-off incident. In December 2014, police arrested around 300 farmers from Jamnagar, Amreli and other parts of the Saurashtra for disrupting the state government’s Ravi Krishi Mahotsava, an initiative started by Gujarat government to award best practices in agriculture. According to reports, a suicide by a cotton grower in Amreli district and the alleged manhandling of detained farmers in police custody in Lalpur, Jamnagar, added fuel to the farmers’ ire which was followed by arrests. According to statistics of Gujarat Home Department, 25 farmers killed themselves in 2012-2013 due to crop failures following uncertain rains.

Bhartiya Kisan Sangh, affiliated to RSS, which has been taking up the issue of the farmers’ problems, backtracked from these protests after Gujarat Chief Minister Anandiben Patel announced loan waivers and electricity subsidies in some areas of the state. However, the farming community has made their demands very clear. According to JAA-G, cotton growers were suffering losses as its price had declined to less than Rs 800 per 20kg. They demanded that the government should make arrangements for the Cotton Corporation of India to buy the crop at Rs 1,100 per 20 kg. For groundnut, too, farmers have demanded the price be raised from Rs 850 to Rs 1,100 per 20 kg. Central government and Gujarat government are yet to pay any heed to these demands.

The petition filed by Virani states that farmers are not getting remunerative prices, which leads to farmers committing suicide across the country. "Farmers are paying 2 to 2.5 times more for production of cotton while procurement price has decreased by 45 per cent," states Virani. On the other hand, the yield has been impacted by erratic weather and insect attacks even on the genetically modified, pest-resistant cotton crops.

Among other things, these farmer leaders are demanding there should be no de-commanding of Narmada waters and diversion towards industries. Over the last few years, Gujarat government, in order to set up industries, has been shrinking the command area of Narmada canal, which has decreased the water supply to many agriculturally important areas such as Mandal and Dholera. The farmers are also demanding a repeal of Special Investment Region (SIR) Act, and Irrigation Act. SIRs are industrial hubs, which have been planned across the state of Gujarat to promote various kinds of industries. On the other hand, the Irrigation Act makes it very difficult for the farmers to draw water from canals or dig wells below a certain depth. These farmers have been also demanding the withdrawal of amendments to the land acquisition Act passed by the Cabinet through the ordinance route.