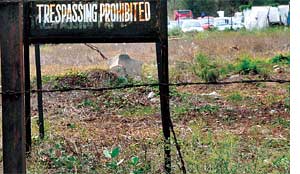 A quarter of the world's arable land has degraded

a majority of the farmers in Angola is facing land crisis. Two-thirds of the country's land has degraded. In the aftermath of the destruction left behind by the civil war (1975-1991), forest after forest was cut down for timber. Landmines in open areas have left many places completely uncultivable.

Such degradation not only causes an immediate decline in productivity but its effects are long-term. Z G Bai of Wageningen University, Netherlands, and other researchers from Sweden and Netherlands assessed land degradation on a global scale. They used parameters like Normalized Difference Vegetation Index or ndvi ( measure of the amount of sunlight reflected by a particular surface) of different kinds of land, productivity of an area and rainfall variability.

The study showed that 24 per cent of the world's land has degraded. The team studied images of lands taken by remote sensing over the past 25 years and calculated their ndvi. Plants require light for photosynthesis. Hence they absorb more light than barren grounds which reflect more. If there are more crop plants in an area, that region would show a higher ndvi. This would also indicate that the net primary productivity of the land is high. As more forests are cut down, larger areas show a lower ndvi, indicating further degradation. "Degradation is primarily driven by land management and catastrophic natural phenomena," said David Dent of isric- World Soil Information, one of the authors for the study published in the September 2008 issue of Soil Use and Management.

A previous study had deemed 15 per cent of global land degraded. The regions pointed out by the new study do not overlap with the previous ones indicating that the extent of degradation is increasing. Climatically viewed, the study found that humid areas are degraded the most with Indo-China being one of the worst affected.

In their country-wise estimate, the team found 18.02 per cent of India's land to be degraded. This is also the figure that a June 2007 report released by the National Remote Sensing Authority, Hyderabad, came up with. Called the Wasteland Atlas of India, this report used both ndvi as well as physical surveys to calculate the amount of land that went waste in India. About 55 million hectares (ha) or 17.45 per cent of India land was found to be a waste. Himachal Pradesh, Uttarakhand and Tripura had the highest percentages of degradation.

K P Tripathi of the Central Soil and Water Conservation Research and Training Institute, Dehradun, one of the collaborators in the report, attributed this to hotels, roads and other infrastructure due to increasing tourism in these places.

Water erosion removes millimetres off the top soil. This is also a factor adding to degradation and too small to be measured by ndvi. Based on his own physical measurements, Tripathi said 57 million ha more should be added to the official figure of 55 million ha of degraded land.