Farmers gather in Delhi to demand compensation for crop loss

Instead of giving aid to farmers, government is trying to snatch their land through land bill, say farmers 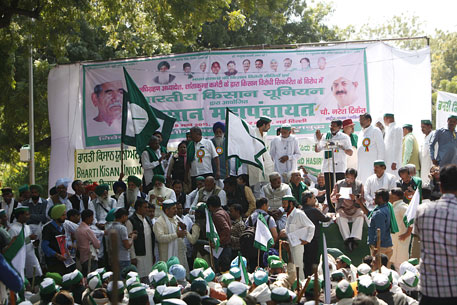 Thousands of farmers from different parts of the country gathered in Delhi on Friday to protest against the Centre’s land acquisition bill and demand compensation for crop loss due to the rains and hailstorm in February and March.

The Bhartiya Kisan Union (BKU) leaders have thrown their weight behind these farmers who have lost their ready-to-harvest wheat and mustard crops.

The agitation will go on till the government agrees to a dialogue, Rakesh Tikait, the national spokesman of BKU, said. “The union wants to talk to the PM. An expert committee should be formed to estimate the total crop loss,” he added.

Crop damage in many areas over 60 per cent

According to Tikait, for the first time the farmers have faced so much loss. The entire Northern India has recorded loss of wheat, mustard, potato and several other important Rabi crops.
“There has been 50-60 per cent loss in several places. In some areas, crops have been entirely damaged by the rains,” the union leader told Down To Earth.

The kisan mahapanchayat was convened to protest against the anti-farmer polices of the Central government, according to the All India Coordination Committee of Farmers’ Movement that is spearheading the protest. It started on March 18 and will go on until the government is ready for talks.

The panchayat is mainly protesting against three issues. These are the land bill, compensation for crop loss and fair price for crops. Reducing the rate of crops has badly affected the farmers, Tikait said. “The government should increase the minimum support price for crops and give subsidy to the farmers. Today, no businessman is committing suicide, but farmers are dying everywhere,” he said.

According to Tikait, the land bill is dangerous. “Around 30 per cent of land in India will go to the government under it and the farmers will lose their precious lands.”

The union leader said there should be a direct negotiation between farmers and businessmen who want to buy land. “Without negotiation, the farmers should not give away their land. In this way, conditions for land acquisition will be set and forcible acquisitions won’t happen. If farmers are not in favour of giving away land, their land should not be snatched.”

Tikait said for any project to take off, at least 80 per cent of landowners should agree to it. The best thing is to declare industry zones and demarcate use of lands.

The union leader said the crop insurance policy should be in place. In reality, if the losses are up to 70 per cent, it is shown as only 15-20 per cent on papers. There is 100 days work guarantee for labourers under the Mahatma Gandhi National Rural Employment Guarantee Act (MGNREGA), but there is no such guarantee for farmers. A bill should be brought which will guarantee minimum income to the farmers. “Today farmers are dying due to the lack of government support,” Tikait said. 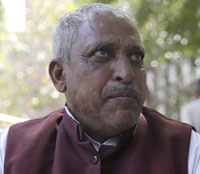 Rajpal Sharma is a broken man today. The farmer from Aligarh in Uttar Pardesh was looking forward to a bumper harvest this year. But the heavy rains have flattened his wheat crop.

Sharma owns 8 acres (one acre equals 0.4 hectare) of land on which he had cultivated mainly potatoes and wheat this year. At present, the wheat is flattened to the ground and the potatoes are wasting in the fields due to water stagnation.

When asked about the estimated loss, he put it around 50 per cent. “The land survey is almost over but it is of no use. They always try to show the loss as less than 50 per cent to avoid paying compensation. There have been 10-12 suicides in Aligarh till now.”

The farmer, who has lost up to Rs 10 lakh till now, is demanding compensation. “Modi had said achhe din ayaenge. Compensation should be declared and the government should fulfill the promises made to the farmers,” he added.

According to Sharma, the MSP on crops should be increased and the diesel rate reduced. “I am ready to go to jail if the police come and beat us, but will not go back without compensation.”

Vidyadhar Olkha from Rajasthan’s Jhunjhunu district has similar woes. He has 25 acres of land on which he had cultivated wheat, mustard, gram and fenugreek. But rainfall coupled with hailstorm has damaged 70 per cent of the standing crops on his fields. “My mustard has been completely destroyed as the seeds have scattered. Strong winds have flattened my wheat crop.”

When asked about the BJP-led state government’s intervention, Olkha said the Vasundhara Raje government had increased the rate of power. “We will revolt against the Raje government. We have to draw water from pumps using power to irrigate our fields. Instead of hiking the electricity rate, it should be made free like it is in Punjab.”

Olkha said that small-scale industries should be set up in villages to end the problem of unemployment. “Modi has turned back on his promises and is there for corporate only.”
He also wants Delhi chief minister Arvind Kejriwal should come and listen to farmers’ grievances as he claims to be for the aam aadmi.

He wanted 100 per cent compensation. “Instead of giving farmers aid, the government is trying to snatch our lands through the Land Acquisition Bill,” he said.

Impact of monsoon rainfall on the total foodgrain yield over India

The Right to Fair Compensation and Transparency in Land Acquisition, Rehabilitation and Resettlement (Amendment) Bill, 2015