Farmers in Raigad protest against land acquisition for Delhi-Mumbai corridor 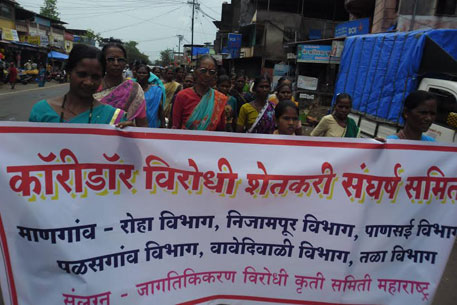 Hundreds of farmers from two dozen villages of Raigad district in Maharashtra today protested against forced land acquisition of 67,500 acres (one acre equals 0.4 ha) for Delhi-Mumbai Industrial Corridor (DMIC). The protesters marched towards the district sub-division office (SDO) under the banner of Corridor Virodhi Sangharsh Samiti and Jagatikikaran Virodhi Sangharsh Samiti claiming that the land was being acquired forcefully.

The US $ 90 million DMIC is India’s most ambitious infrastructure project to develop new industrial cities called “smart cities”. The objective of the project is to expand India’s manufacturing and services base and develop DMIC as a global manufacturing and trading hub. The program has been conceptualized in partnership and collaboration with government of Japan.

Ulka Mahajan, one of the protest leaders, said that the land is being acquired for the Dighi Port which was supposed to come up in the area. The project would render farmers in 78 villages landless. “Village panchayats in the area have unanimously decided not to give their land for this pro-corporate scheme as it would impact livelihood of hundreds of families. Farmers here have been agitating for over one-and-a-half year and as per our information Central government and DMIC authorities have asked the state government to drop Dighi port from DMIC.”

“However, state government is still continuing the process of land acquisition,” she alleged. She complained that under the Right to Fair Compensation and Transparency in Rehabilitation and Resettlement Act 2013, no land can be acquired unless 70 per cent of the farmers from the area give consent for the land acquisition. “While the authorities claim that most of the farmers are willing to part with their land, information acquired through RTI clearly states that only five per cent of the total land is going to be sold to DMIC. This five per cent comprises of only builders and land dealers and not farmers,” she alleged.

The protesters warned the government to stop land acquisition failing which they would be forced to intensify their protest. They requested government not to amend the land acquisition Act and dilute it  as it would become anti-farmer and anti-people threatening food security of the country.