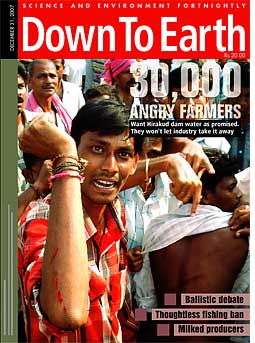 A continuing agitation by farmers over diversion of water from the Hirakud reservoir to industrial units is threatening to spoil the Orissa government's calculations for assembly elections next year. Farmers say they will not accept anything less than a complete ban on industrial use of the dam water. On March 23--Bhagat Singh's 76th martyrdom day--the farmers renewed their pledge to continue their fight for water. They gathered at 'Chasi Rekha', a border wall inside the reservoir beyond which industrial units are not allowed to draw water. Holding the dam water in their palms, they pledged: "We will not allow company raj on Hirakud water."

On November 6, 2007, some 30,000 farmers had gathered at the reservoir in Sambalpur district. Many were injured in police lathicharge (see 'Ground swell', Down To Earth, December 31, 2007). Soon after the incident, Chief Minister Naveen Patnaik announced a Rs 200-crore package for the repair and renovation of the Hirakud canal system. His government also declared 2008 the 'Year of Irrigation' and recently Patnaik visited Delhi to seek support for irrigation projects in the state.

Farmers are, however, far from pacified. "All this is being done to appease farmers," says Dilip Padhi, secretary of the Hirakhand Nagarika Parishad, one of the first civil society groups to protest diversion of water from agriculture to industry. "The package is welcome but it is too little. If there is surplus water in the reservoir, why don't they ensure it reaches the tail-end area?" asks Ashok Pradhan, president, Sambalpur Zilla Krushak Suraksha Sangathan. Lingaraj, convenor of the Western Orissa Farmers Coordination Committee, says the package is aimed at diverting attention from the core issue of water diversion.

The changing tone of the government does little to allay the farmers' apprehensions. Soon after the lathicahrge, the government had declared that the Hirakud water would not be given to industrial units. Later, it devised a new term: irrigation share. It said not a single drop from the irrigation share will be diverted to industry. "We fail to understand from where this term has come, for no earmarking has been done for irrigation as opposed to allocation for factories," says Pradhan.

When announcements did not work, the government invited the western Orissa farmers' group for talks on March 7, two days before the chief minister's visit to Bargarh town in Hirakud's command area. "We submitted a memorandum and had a discussion. However, there was no new offer for us. The reality is that this government cannot ignore industry," says Lingaraj. The group refused a second meeting, saying it did not find any "real commitment" from the government. They want the government to cancel all post-2003 agreements with industrial units and reach water to over 20,000 hectares in the command area. Another of their demand is that Patnaik should punish companies illegally drawing water from the dam.

"We are still in the dark on how the Rs 200-crore package will be implemented and funded," says M Govindu, chairperson, Sambalpur Distributary Apex Committee of pani panchayats or water-user associations. Initially, the repair was planned under a proposed World Bank-funded project, but that will take a couple of years and the government has promised to finish the work by June this year. It now says the money will come from the National Rural Employment Guarantee Scheme (nregs). This only strengthens farmers' doubts. "In nine months the whole state could spend Rs 365 crore under the scheme. How can it spend Rs 200 crore in just eight blocks before June?" asks Padhi. Then nregs is labour demand-driven; the material component cannot exceed 40 per cent of the expenditure, while canal repairing is material-intensive.

While the government is harping on canal renovation, it is keeping distance from the demand to cancel water allocation to industrial units. The farmers can see through this. "Companies will not remain silent for long. So we are planning to strengthen our base and will reach out to each village through meetings and cycle rallies," says Pradhan.