How should Andaman & Nicobar tackle the African giant snail? 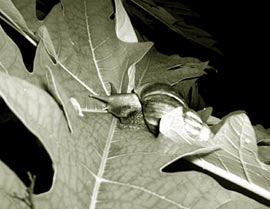 environmentalists and non-governmental organisations (ngo) of Andaman and Nicobar Islands are up in arms against a move by the Central Agricultural Research Institute (cari), Port Blair, to introduce a molluscicide targeting the African giant snails (Achatina fulica). They fear that since most pesticides are not host specific, the new molluscicide would also kill members of other closely related species, disrupting the natural food chain. But cari insists there is no such threat, although no field trial of the molluscicide has been conducted as yet.

The African giant snail is a big land snail. They had been brought to the Andaman Islands during World War ii by the Japanese who used them to supplement the protein requirement in their diets. Since then, the number of these snails has increased manifold. cari scientists recently announced that their research on pesticides targeting the African giant snail was at the last stage and they would very soon distribute the chemical among selected farmers for practical demonstration.

"The snails frequently reach such enormous numbers, at least locally, that they become not only agricultural and garden pests but also a major public nuisance, causing road hazards. Achatina fulica is considered the most important snail pest in the tropics and subtropics and perhaps the world," reveals G Shayam Prasath, an entomology scientist at cari, who claims to have developed the eco-friendly molluscicide against the species. "This formulation is safe for aquatic fauna," he adds. Prasath also points out that these giant snails pose a serious conservation problem by multiplying rapidly and invading native ecosystems. They are cross-fertilising, egg-laying hermaphrodite. They lay eggs in at least six clutches annually; the number of eggs per clutch averaging around 250. "They might not only eat native plants, modifying habitat, but probably also out-compete native snails," he says.

D V Rao, scientist at the Zoological Survey of India, agrees that this molluscicide might kill snails of other species, disturbing the region's ecological balance. "Birds, lizards and frogs eat local snails like Macrodilaugs indica and Opeas gracile and if the population of these snails decreases, there will be a shortage of food for them," he explains. Madhushree Mukerjee, an environmentalist who recently authored a book on the Andaman Islands, warns: "Introducing pesticides or predators should be done only after controlled field trials, not just lab tests." But Prasath insists that the molluscicide will not cause any harm, though he admits that it has not been tested on other species of snails. "I cannot reveal the names of its [the molluscicide's] constituents but believe me, it is surely eco-friendly," he raves.