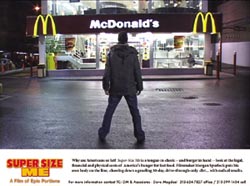 For 30 days, Morgan Spurlock only ate food from McDonald's. The result: he added 12 kg to his weight and a feather to his film-making abilities. Spurlock's documentary Super size me: a film of epic portions won him the best director prize at the Sundance Film Festival, usa, in 2004. The Australian Broadcasting Corporation called the documentary "a tongue in-cheek -- and burger in hand -- look at the legal, financial and physical costs of America's hunger for fast food." In the us obesity affects one in three adults. Spurlock says he wanted to know why. He traveled through 20 us cities and interviewed gym teachers, cooks, children, lawmakers and health experts for his research. During the trip, Spurlock made three rules regarding his McDonald's diet: he could only eat what was available at the counter, no super-sizing unless offered and he had to eat every item on the menu at least once.

McDonald's says Spurlock, who has put up a website, www.supersizeme.com, acted irresponsibly. But as The Economist, the London-based magazine, says: the film makes the point that the convenience of modern food means that it is easy for people to eat unhealthily."