Fastest loss of forests in Asia 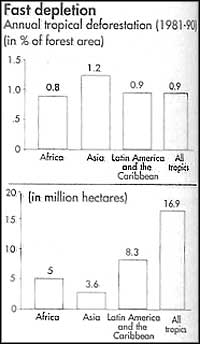 ASIA TOPS the list of continents with the highest deforestation rate. The initial estimates of the 1990 tropical forest resources census show about 3.6 million ha -- or about 1.2 per cent -- of forest land are cleared each year in Asia. This is much higher than in either Latin America or Africa, according to the survey conducted by the Food and Agriculture Organisation (FAO).

The 1981-90 study shows that 36 per cent of the world's tropical land area -- 1.7 billion ha -- was forested. Of this, Latin America and the Caribbean had the largest forest cover -- 50 per cent of Latin America's land area or 840 million ha. Asia followed with 31 per cent and finally Africa with 27 per cent.

During the survey period, tropical Africa annually lost about 0.8 per cent or 5 million ha of its forests, with the deforestation rate highest in areas with high population densities and growth. Degradation was maximum in the hill/montane regions of Ethiopia and Kenya.

In Latin America, deforestation in tropical rainforests remained low at just 0.6 per cent, unlike in Asia and Africa. The report stated the low population density in Latin America is the main reason for the lower pressure on forests.

Changes in national land use are one of the most important results of the survey. For instance, along the border of Laos and Myanmar, the increase in deforested areas is more due to progressive degradation than usurping of forest land for agriculture, though there has been an increase in the area under shifting cultivation.

The FAO findings reveal a need for a system of continuous national, regional and global monitoring of fast-depleting forest resources. As the report concludes, "The current state of the forest resources and the depth of concern for their conservation, demand nothing less."