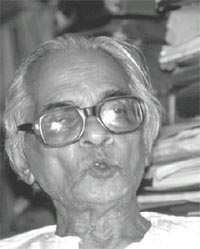 What does a common person do when confronted with a water shortage? Well B K Roy Burman, an anthropologist from Delhi's Chittaranjan Park, went on a fast for two days to protest against the problem. He demanded a more equitable and transparent pattern for the distribution of water by the Delhi Jal Board (DJB). He was on strike from May 21-22, 2001. "I wanted to highlight the fact that Delhi is not facing shortage of water. The scarcity is due to its mismanagement," says Burman.

He broke his fast after his proposal for setting up of a People's Commission on Facts and Fiction: Issues Concerning Water was accepted by the DJB to examine the prevailing inequity. Delhi's chief minister Sheila Dixit also held a meeting with Burman and DJB officials on May 31, 2001, to evolve a way to address the problem. However, some DJB officials are doubtful about their promise given to Burman. "Uniform distribution of water is not possible because of the natural decline in volume and pressure of the water as the flow goes down the line. This leads to a water scarcity for consumers in some areas," says Shalabh Kumar, an executive engineer of DJB.

Representatives from at least 15 non-governmental organisations ( ngo s) have supported Burman's cause. Activists including Rajendra Singh of Tarun Barat Sangh, a Rajasthan-based ngo and Medha Patkar of the Narmada Bachao Andolan also hailed Burman's move. "The water availability in Delhi is more than four times the international average. Even then the residents have to face a water scarcity problem," says Burman. In a petition, Vinod Kumar Jain, chairperson of Tapas, a Delhi-based ngo stated that out the total water supplied by DJB, 25 per cent is lost due to leakage and 15 per cent is lost due to pilferage by industries. DJB has no provision to monitor the water consumption by the industries.