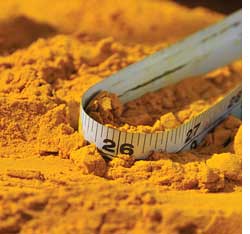 A clue for weight watchers

for all of its medicinal uses, turmeric has not been known for treating obesity. After learning how its active ingredient curcumin inhibits tumour growth, biologists and pathologists at Tufts University in the US have shown how it does the same to fat cells it suppresses their blood vessels.

"Weight gain is the result of the growth and expansion of fat tissues, which cannot happen unless new blood vessels form, a process known as angiogenesis," said Mohsen Meydani, one of the researchers.

Experiments on mice showed curcumin did slow weight gain. Researchers at the Centre for Aging at Tufts University divided mice into three groups. One group was put on normal diet; the second was fed high-fat diet without curcumin; and the third, a high-fat diet with curcumin.

Meydani and his colleagues observed that in the mice fed with curcumin, the number of small blood vessels or microvessels in fat tissues were less than that in the other group on high-fat diet.

In the study published in the May issue of Journal of Nutrition the authors wrote they did not know exactly how curcumin inhibited microvessel growth. It might be by inhibiting proliferation of endothelial cells that line the interior surface of blood vessels, they said.

But why does less number of blood vessels reduce growth of fat tissues? The researchers explained that blood brings lipids or fat molecules to cells resulting in their growth. If blood vessels are less in number, the blood carried will be less, so lipid deposition will also be less.

They also studied rat cells incubated with curcumin outside the body in cultures. Curcumin appeared to interfere with the expression of two genes which signalled blood vessel development in fat tissues. "It is important to note we don't know whether these results can be replicated in humans because, to our knowledge, no studies have been done," said Meydani.