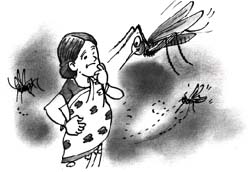 why are mosquitoes and other winged creatures partial to pregnant women? While scientists always suspected that it is something to do with one's skin or more specifically its secretions -- emitting odour -- supportive evidence could not be unearthed until recently. Now, research specifically targeted to unravel the mystery between biting frequency and body odour has found close association between the skin secretions, bacteria accumulated by the skin and the resultant smell.

Every night during the study period, these women slept alone under a bed net in six identical huts. They were given anti-malarial drugs and received few bites. The following morning the number of the Anopheles gambiae mosquitoes -- the main vectors of malaria in Africa -- were counted to measure the relative attractiveness of each woman. The procedure was carried out with the same group of women for three consecutive nights and repeated with 12 different groups of women. The researchers tried to postulate the reasons for this attractiveness as linked to pregnancy. They found that women at an advanced stage of pregnancy exhaled 21 percent greater volume that non-pregnant women. It is known that mosquitoes are attracted to the moisture and carbon dioxide in exhaled breath and not surprisingly the mosquitoes were preferentially biting pregnant women.

Secondly Lindsay's group observed that the abdomen of pregnant women were 0.7 c warmer. These slightly warmer pregnant women released more volatile substances from their skin than their normal counterparts making the mosquitoes locate them more easily. Lindsay's message is clear: "This study underlines the importance of protection, particularly for women in the first pregnancy. Simple measures can help, such as using bed nets treated with insecticide and checking for lurking mosquitoes inside the nets." Their group is also attempting to address the next challenge, which is to try and make the pregnant women less attractive for mosquitoes. "We are already looking into the use of bacterial soap to reduce the chemical signals produced by skin bacteria, which help mosquitoes find blood".

Reacting to the report by Lindasy's group, Flor Martinez Espinosa and his team from Instituto-Oswaldo Cruz, Fiocruz, Rio de Janeiro, Brazil, compared the conditions of South America with those of Africa. While agreeing with the reasons put forward by the Dublin group of the generally increased attractiveness of pregnant women to mosquitoes they propose additional explanations for the higher incidence of malaria in pregnant women ( The Lancet , Vol 356, No 9230). They say one reason for the vulnerability of pregnant women to malaria could be their susceptibility to the falciparum parasite, which is unrelated to the number of mosquitoes they attract. This susceptibility, they claim, could be due to hormonal metabolic or other reasons due to the presence of the parasites in the placenta of these women. However, both groups emphasise the need to find new strategies for protecting this high-risk group against malaria.