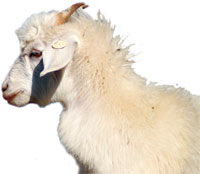 “SOFT GOLD” and diamond fibre—these words are used to describe cashmere, a fibre known for its light weight and cosy warmth. The material has infatuated the Western fashion world, leading to an expansion of the cashmere industry into a multibillion dollar business. However, a steep rise in the number of cashmere producing goats in Central Asian steppes is altering ecosystems and displacing several native endangered mammals, such as chiru, saiga and the iconic snow leopard, shows a study published in Conservation Biology in August.

China and Mongolia alone produce 90 per cent of the world’s cashmere supply, with Italy, UK, China and Japan being the top four importers. In Mongolia alone, cashmere goats have increased from 5 million in 1990 to about 14 million in 2010. According to the study, over the last two decades eight core species of the landscape have started to decline as livestock farmers of Central Asia expanded their domesticated goat herds three-fold.

Researchers have found that increased grazing pressure due to domesticated goats has decreased the amount of edible grass across the Tibetan Plateau, North Indian and Mongolian landscapes by as much as 95 per cent in the last two decades. Saiga, the Tibetan Chiru, Bactrian camels, wild yak and the Himalayan bharal are, thus, directly affected by an increase in the number of cashmere goats as they feed on the same grass as the goats.

Reduction in the number of these mammals is causing a dearth of natural prey for the iconic felid of the high altitudes —the snow leopard. What should it do but prey on cashmere goats, the the only available option. However, this brings it into direct conflict with the herders.

“In certain areas, herders face 10 per cent livestock loss to snow leopards and wolves. Particularly damaging are instances where snow leopards manage to enter poorly constructed livestock corrals, which results in many animals getting killed in one instance. We do not have records of how many snow leopards might have been killed in retaliation but that the predators are killed across Central Asia is common knowledge,” says Charudutt Mishra, coauthor and science and conservation director of the Snow Leopard Trust.

The authors are planning to bring herders and buyers together on a common platform of conservation through “green labelling” of cashmere products. If, however, the cashmere demand in international market is not curbed, will this help? “Green labelling is a controversial approach and there is much discussion and testing needed about how and whether this would work across large landscapes,” says lead author, Joel Berger, conservation biologist with the University of Montana, US.

If such dialogues do not work, the consequences could be dire. “If commitment is absent globally and locally, charismatic mammals of the high mountains will perish by becoming victims of fashion,” says Peter Zahler, deputy director, Asia Programs, Wildlife Conservation Society.