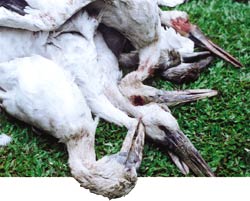 A severe hailstorm took a heavy toll on resident migratory birds in Assam recently. The storm killed more than 200 such birds in different parts of the state. Commonly known as the Asian openbill, the birds are called samukbhanga by local inhabitants. During spring every year, they come to Assam from Nepal, Bangladesh, Sri Lanka and Pakistan. Bearing a close resemblance to the Siberian crane, a full-grown openbill is over half a metre high and weighs about two kilogrammes. The bird's favourite food is snail which is found in abundance in paddy fields. It derives its local name from its ability to break the shell of the snail with its strong beak. Samukbhanga literally means one who breaks a shell or samuk.

Ornithologist Ghazala Shahbuddin, fellow at Ashok Trust for Research in Ecology and Environment, says, "It is unusual for birds to die in such large numbers." The birds tried to take shelter on top of bamboo and other trees near the paddy fields. Farmers in Nalbari district first noticed the carcasses of the birds in their fields.