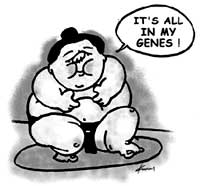 today, the quest to eliminate obesity has more than a slim chance of succeeding. Thanks to the discovery of a gene that controls the growth of fat cells.

The recent research published in the journal Genes and Development says that the gene, discovered by Harvard University and pharmaceutical company Pfizer scientists, can switch on and switch off the growth of fat cells called adipocytes. Although in its primary stage, the research presents a glimmer of hope for controlling the extra flab in thebody. Because if it becomes possible to monitor adipocytes, expanding waistlines can be kept in check.

However, there is a catch. Researchers involved in the discovery conducted their experiments on cells growing in culture dishes and not on live animals. And because the research has not been done on live animals, it may take a long time before any products emerge from this discovery.

A key person of the path-breaking research, Bruce Spiegelman at the Harvard-affiliated Dana-Farber Cancer Institute in Boston, says: "The growth of fat cells has become one of the most intensively studied developmental processes in modern biology because obesity has become a major health problem. Besides, advances in cell culture techniques have made it possible to study how the fat cells grow and mature."

Cells minus the protein ppar gamma were created by the team that Spiegelman headed. The researchers showed that for the growth of fat cell, gene and the ppar protein are necessary.Without the functioning of the gene, no protein is made. Consequently, fat cells do not develop and mature.

Another team of researchers from pharmaceutical company Pfizer Inc proved that ppar-gamma is most important for the growth of fat cells. They did this by using a molecular on-off switch. The Pfizer scientists also found that fat cells develop due to a protein called ppar-gamma 2 which acts actively to bring about this development.

Biologist Heidi Camp, who headed the Pfizer team, says, "The ability to selectively knock out or knock down the expression of a specific gene provides a powerful approach for understanding a gene's function." By adding more and more amounts of the protein, altered fat cells can be made to grow.

Researchers of this significant discovery owe much to the scientists at a small California-based biotechnology company, Sangamo BioSciences, who have created a very precise gene-control method. Till now, these scientists have used these gene-control mechanisms to activate or check around 500 various human genes, countless animal genes and plant genes as well. Sangamo scientists created zinc-finger proteins. These proteins could find out one specific gene among many other genes and change the function of that specific gene.

Although it is too premature to believe that obesity has been combated, to say that the potential target to eliminate obesity is in sight now would not be an overstatement.